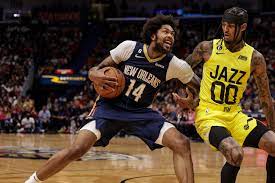 Injuries to Pelicans stars Zion Williamson and Brandon Ingram took some of the luster off of New Orleans’ promising start to the regular season.

Williamson was diagnosed with a posterior hip contusion after crashing to the court on a transition dunk attempt that was blocked from behind by Utah’s Jordan Clarkson during the fourth quarter of a 122-121 overtime triumph by the Jazz on Sunday night.

Ingram, a dynamic scorer from the wing who’d averaged 28 points in the Pelicans’ first two games, left in the first half with a concussion.

The 6-foot-6 Williamson, who is listed at 284 pounds but appears lighter coming off of a new summer workout program, remained on the floor in pain for a few moments before briefly trying to continue playing.

“I thought, ‘Oh, man, this isn’t good,’” Pelicans guard CJ McCollum said of the sight of Williamson crashing to the floor on his back side. “Unfortunate play.“Hopefully, he’s back sooner than later,” McCollum added. “But that’s a lot of weight, a lot of energy, a lot of athleticism coming down.”

Ingram scored 10 points in 11 minutes before a collision with teammate Naji Marshall knocked him out of New Orleans’ home opener.

Williamson had 25 points before his hard fall, after which he checked out of the game for good.The Pelicans play next on Tuesday night at home against Dallas and it was unclear whether Williamson or Ingram will be available for that game.

When Williamson checked out, he did not leave the bench area to seek immediate treatment for his bruised hip. He remained with his team until the end of the game, but coach Willie Green said there was no discussion about putting Williamson back in the game.

“The word that I got (was) that he wasn’t going back in,” Green said.

Williamson, the first overall choice in the 2019 NBA draft out of Duke, missed all of last season while recovering from a broken foot. He was cleared to return to full basketball activities this offseason and his return to action has been eagerly awaited in New Orleans.

He opened the season by scoring 25 points in a victory at Brooklyn and followed that up with 16 points in a win at Charlotte.

The Pelicans’ home opener marked Williamson’s first regular-season action in New Orleans since May 4, 2021. And there was a buzz in the sell-out crowd whenever he got the ball on the offensive end. His highlights included an alley-oop dunk on a lob from McCollum in the first half and he scored most of his points around the rim.Williamson was out in front of a fast break and leapt toward the rim, seemingly about to slam down a crowd-pleasing, one-handed jam, when Clarkson, chasing from behind, got his hand on the ball and seemed to throw Williamson off-kilter.

The block appeared clean on video replays and no foul was called.

“I saw the replay and it was all ball, so a really great play by J.C.,” Jazz forward Lauri Markkanen said of Clarkson’s block adding that it looked like Williamson “had a wide-open dunk.”

“Really good hands by him just to get all ball,” Markkanen said.