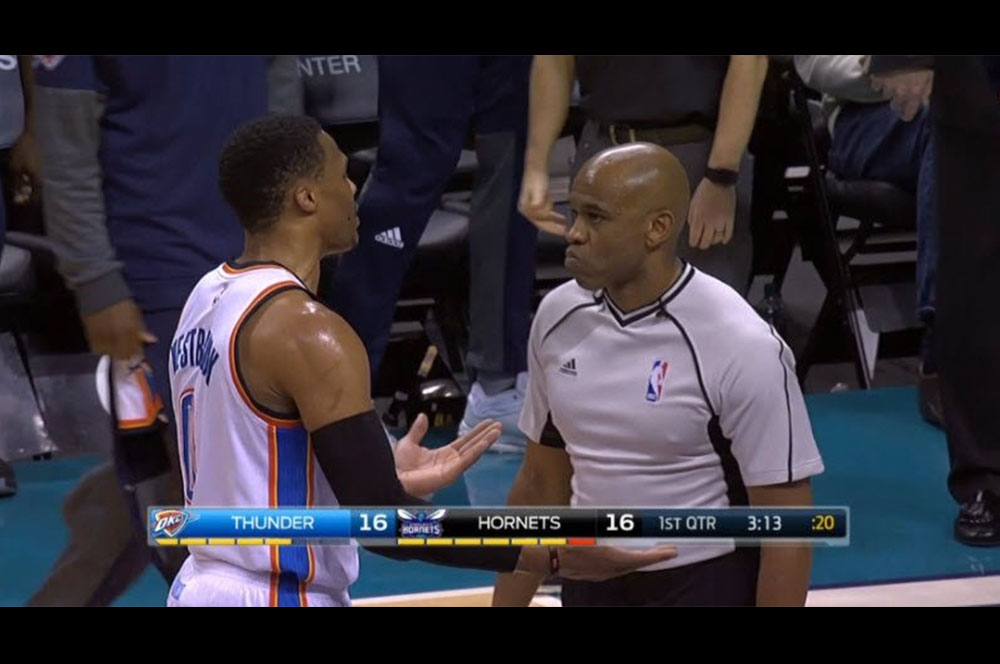 CHARLOTTE, N.C.—Russell Westbrook said he has “no idea” why he was assessed a technical foul for hitting a game official in the head with a ball during the first quarter of Oklahoma City’s 123-112 loss to the Charlotte Hornets on Wednesday night.

After a timeout, Westbrook was near the Thunder bench and threw an overhead pass that hit official Tre Maddox in the head while he wasn’t looking. Another official, Brent Barnaky, saw what happened and charged Westbrook with the technical foul.

“Instead of Russell (Westbrook) giving the ball to the nearest official, he throws it in the area where Tre (Maddox) is and Tre is not looking,” official Sean Corbin said after the game. “The ball hits him in the face, so that is a technical foul.”

Westbrook said he was just returning the ball to Maddox after the timeout before heading to the bench.

He said he even called Maddox’s name before throwing the ball and his actions were clearly unintentional.

“(Maddox) turned right at me and then he looked away,” Westbrook said. “I don’t know what to tell you, I really don’t. I’m not the type of guy. I would never, ever disrespect the game in that way, throw the ball at a referee. I’ve never done it before.

“That’s just not even heard of in our game today. If you do that you get kicked out of the game. That’s not allowed and I would never do such a thing.”

Westbrook immediately acted in disbelief at the call, walking away from the Thunder huddle over to the scorer’s table at one point. He tried to plead his case to the officials afterward, but to no avail.

“To get a tech is crazy to me, but I’ll take the good with the bad,” said Westbrook, who had 33 points and 15 rebounds in the loss.