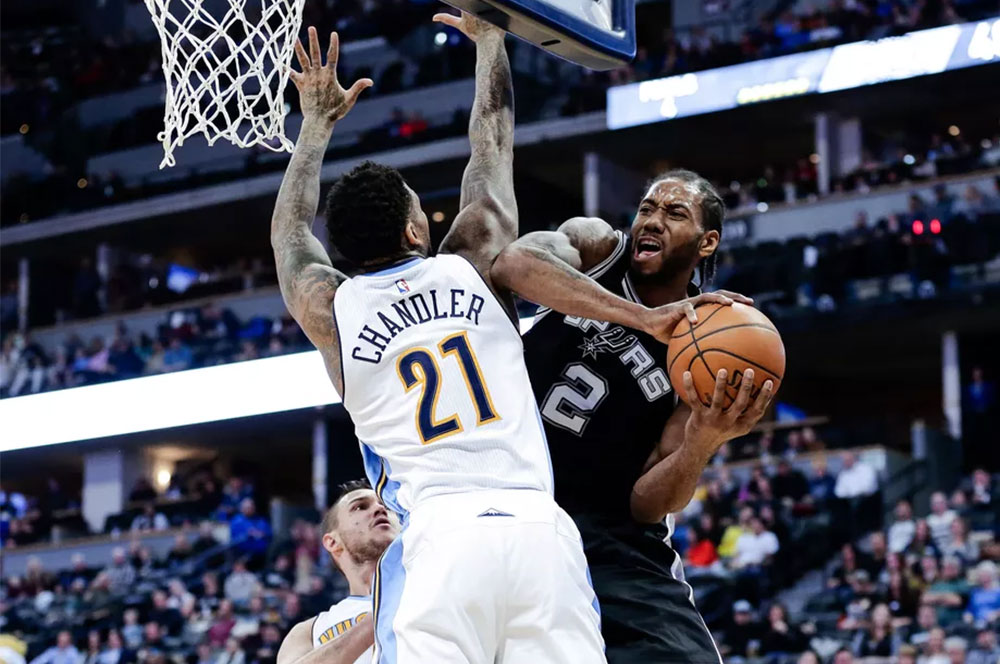 The Spurs outscored Denver 69-46 after intermission.

When Darrell Arthur hit a bucket and a free throw early in the first quarter Thursday night in Denver, good for an and-one, the Nuggets had connected on every one of their first 10 shots.

Denver was red-hot, but only led 22-18, thanks to a similarly sizzling start from San Antonio.

But the Spurs outscored Denver 32-24 in the third frame, and that was all the momentum San Antonio needed as they poured it on for a 127-99 road victory over the Nuggets.

The Nuggets opened white-hot from the field, a start reminiscent of their 163-155 win over San Antonio in 1984, the fourth-highest scoring game in NBA history, and the Spurs all but matched it.

After two Denver free throws, Parker knocked down a jumper and trimmed San Antonio’s deficit to just 24-23. Denver’s Will Barton later flushed a dunk for a 33-27 Nuggets lead, but the Spurs countered with Leonard’s buzzer-beater. Denver led 33-29 after one.

It wasn’t long before the Spurs opened the second quarter much the same way Denver opened the first. San Antonio used an 8-2 run to start the second to snare the lead at 37-35, capped by Patty Mills’ 3-pointer that prompted a Denver timeout.

Out of the timeout, Jusuf Nurkic made a pair of free throws to trim his team’s deficit to 37-36, and Jameer Nelson nailed a 3 soon after, enough for a 39-37 Denver advantage.

The basket-swapping all too present in the Spurs’ overtime loss to Atlanta Sunday evening then began. Gasol converted on a bucket inside, followed immediately by Denver’s Jamal Murray’s basket, securing a 41-39 lead for the home team.

Parker and Gasol hit back-to-back buckets, the latter an and-1, to hand San Antonio a 44-42 lead, but Murray tied it at 44 with a layup on Denver’s next possession.

San Antonio then built a 48-44 lead behind jumpers from Aldridge and Gasol, but the Nuggets remained a pest and cut it to 48-47 with a Gallinari 3. Aldridge countered with a trey of his own on the Spurs’ next possession, and after a basket from Yokic, San Antonio rattled off another 8-2 run to widen its lead to 56-49, again capped by a 3-pointer, this one from Leonard, the Spurs’ seventh triple of the half.

Yokic and Parker each hit layups to end the frame, and San Antonio led 58-53 at halftime.

The Spurs began their game-changing onslaught in the third frame. It all began with a Leonard trey, followed immediately by a basket from Parker, pushing San Antonio’s lead to 63-53. Harris then laid in an uncontested layup — drawing a predictable timeout from Spurs coach Gregg Popovich — but Green then connected on another triple. Arthur later hit one of his own, bringing his Nuggets team to within 70-61 at the 7:37 mark, but that’s as close as Denver would get the rest of the way.

Parker then canned back-to-back jumpers for a 74-61 lead, and the Spurs pushed their lead to 77-61 after Aldridge’s and-one. The Aldridge show continued minutes later when he knocked down a pair of foul shots, then another signature jumper ballooned his team’s advantage to 83-65.

San Antonio later went on a mini 5-0 spurt via a Ginobili 3-pointer and Leonard layup for a 90-72 lead, and the Spurs entered the final frame up 90-77.

As transforming as the third quarter was, though, it was the fourth that saw San Antonio pull away for good, and with a comfortable cushion.

The Spurs opened with a 6-0 run behind points from Ginobili and Leonard for a 96-77 lead, made even bigger moments later at 100-82 when Mills and Leonard each scored for the visiting Spurs.

The drama had ceased at that point, and Spurs rookie Dejounte Murray saw action on his way to six minutes and two points.