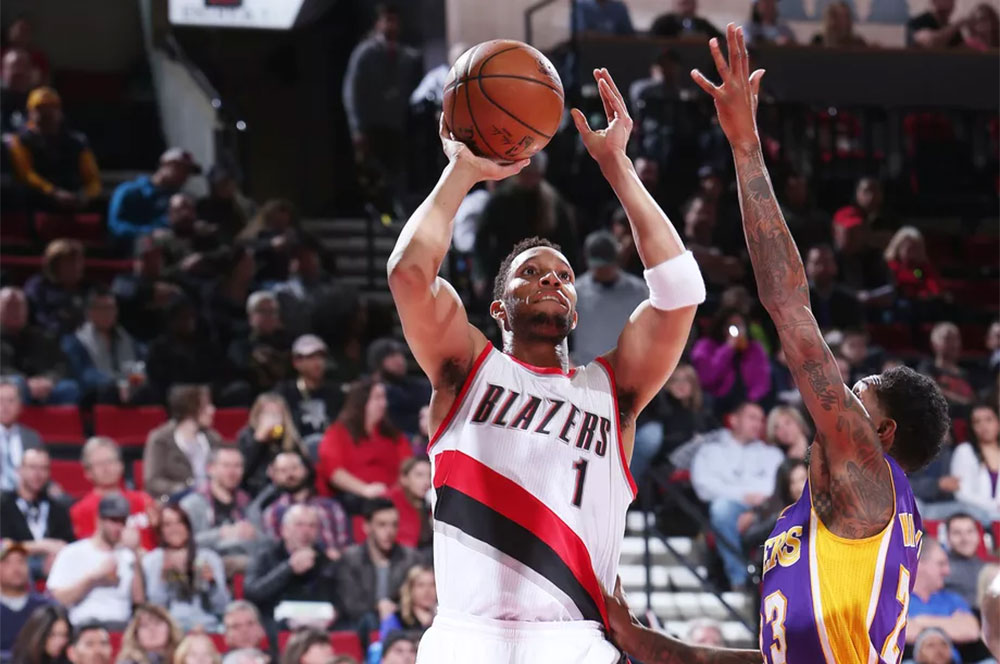 Evan Turner scored 12 points in the final frame, and L.A. came up empty from the field for over five minutes down the stretch, helping the Blazers to a franchise record ninth consecutive win against the Lakers.

Damian Lillard’s return from a 5-game absence was supposed to be the story tonight when the Portland Trail Blazers and Los Angeles Lakers faced off at the Moda Center.

But the Blazers’ much maligned Evan Turner upstaged Lillard down the stretch, scoring 12 of his 17 points in the fourth quarter, and inspired the Blazers to a 118-109 victory. D’Angelo Russell led the way for the Lakers with 22 and Jordan Clarkson added 21 off the bench.

Turner’s 12 fourth quarter points played a key role in Portland’s decisive 34-25 advantage in the final frame. With the Blazers trailing 92-89 with 9:56 to go, Turner took over the offense and scored 10 consecutive points for the Blazers. His run culminated with a driving lay-up with 6:26 to go that gave Portland a 99-98 lead.

“I just took what the defense gave me, obviously,” Turner said to TNT’s Dennis Scott. “I took my time, remained patient, and got to my spots. My teammates found me, and I also think I did a great job reading it. Some shots fell and the offense started clicking.”

Turner’s explosive fourth quarter, and 17 second-half points, was a crucial element in the Blazers 65-47 second half advantage over the Lakers. L.A.’s bench, the top reserve unit in the NBA, had torched the Blazers in the first half to the tune of a 24-7 scoring advantage, helping the Lakers to a 62-53 lead.

The second quarter, especially, proved problematic as the LA reserves, led by Jordan Clarkson’s 13 points, opened the period on a 17-2 run to give the Lakers a 41-31 lead. They would ultimately outscore Portland 38-24 in the quarter.

In the second half, however, the Lakers reserves managed only 15 while Turner, Allen Crabbe, and Ed Davis combined for 32 off the bench. The Blazers also outrebounded the Lakers 25-15 in the second half and held LA to 15-for-41 (36.5 percent) shooting from the field.

As the by-half disparity suggests, the Blazers defense looked above average at times during the second half, but atrocious during the second quarter. This was certainly not the 48-minute effort that had briefly transformed the Blazers into an elite, top-5 defensive unit during Lillard’s absence. But it was still a cut above the last place defense fans became accustomed to in December.

“Defensively, we were pretty solid, and to come back from whatever we were down at halftime and get back into the game, which was a good sign for us,” said Head Coach Terry Stotts after the game.

Interestingly, the Blazers went away from the more aggressive scheme that they had used over the last several games. Portland did disrupt passing lanes on occasion, but they only walked away with six steals after collecting eight or more in each of the last five games. They were also less aggressive on trapping ballhandlers on the perimeter.

Mason Plumlee explained that the change in strategy was related to the ultra-small lineup that Lakers Coach Luke Walton employed – often 6-foot-9 Brandon Ingram was the tallest L.A. player on the court.

“When they went smaller, we went back to our traditional coverages,” said Plumlee. “I thought that was a good move. And we got stops.”

Many fans will be relieved to hear that the defense did not seem to suffer with Lillard on the court. The correlative evidence of the last five games may have suggested that the Blazers perform significantly better defensively with Lillard in street clothes, but that was not the case tonight. The Blazers’ were generally solid with Lillard on the court and the worst defensive stretch of the night, by far, came while Lillard rested to open the second quarter. His game high +28 captures that effect.

That is not to say that Lillard was perfect on defense. He did occasionally fail to close out on shooters, and at one point in the fourth quarter Russell torched Lillard on two consecutive post-ups and then drew a shooting foul out of a pick-and-roll. In short, Lillard may not be the root cause of the Blazers’ defensive struggles, but he is still a work in progress.

Despite his scoring flurry on Lillard late in the game, Russell was only 6-for-18 from the field. Fellow starters Julius Randle (4-for-13) and Nick Young (5-for-15) were similarly inefficient. Twenty-two combined free throws from Randle and Russell did salvage their night.

Offensively, Lillard started hot, hitting his four shots for 10 quick points, on his way to 15 first half points. He tired down the stretch, however, scoring only six second half points on 2-for-7 shooting – Lillard will likely need a game or two to work himself back into shape.

“[Lillard] looked really fresh at the beginning - he may have fatigued a little bit. A couple of his shots late looked a little tired,” said Stotts. “But I thought he managed the game pretty well, and I tried to get him off the ball a little bit so it wasn’t quite as fatiguing.”

The Blazers will be in action again on Saturday night against the Pistons at the Moda Center.