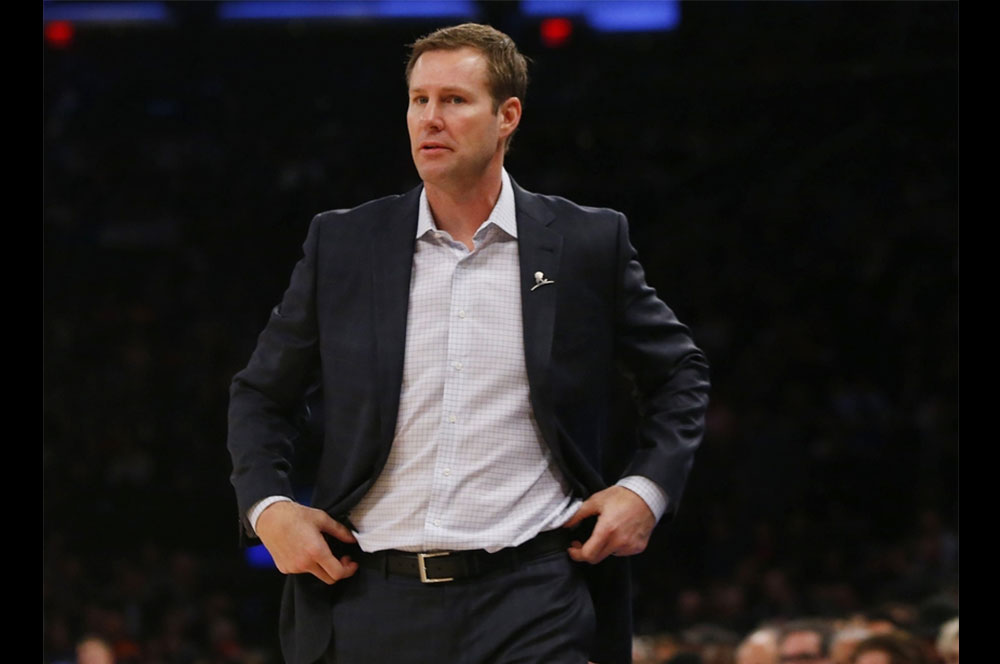 After botching the summer, Chicago is reportedly thinking about blaming it on the coach. This is what the Bulls do.

The preseason concerns have come home to roost: The Bulls are dead last in effective field goal percentage, dead last in three-point percentage, and the only team in the NBA taking fewer than 20 threes per game. (For comparison’s sake, the Rockets are taking a hair under 40.) Less than a quarter of the Bulls’ shots come from beyond the arc (league’s lowest mark) and less than a fifth of their points come from there (league’s lowest mark).

As a reminder, the Bulls, who are built around superstar Jimmy Butler, added Dwyane Wade and Rajon Rondo in the offseason. Both are career 29 percent three-point shooters.

As another reminder, coach Fred Hoiberg was hired in 2015 to bring his spread 4-out offense to the stodgy Bulls.

Something is wrong here.

Further evidence that something is wrong comes from Marc Stein’s Friday report that Hoiberg is the NBA head coach with the hottest seat as we approach the midway point of the season. I wrote back in November that this could be the first season in a long time without a midseason firing, provided Alvin Gentry could survive New Orleans’ awful start. Stein’s researchers determined that the last season without a firing was 1970-71, 46 years ago!

I didn’t even include Hoiberg on my list when I wrote that piece, in part because the Bulls started well and in part because the Bulls gave Hoiberg a huge amount of guaranteed money in 2015. He has at least $15 million in guaranteed salary remaining (including this season). Plus, the Bulls are still paying Tom Thibodeau after firing him in 2015. The idea that Hoiberg would be at risk seemed (and seems) absurd.

In college, you can have a system and build a team around it. You make recruiting decisions and build rotations around what will work in your system. It doesn’t work like that in the pros. Unless you’re the rare coach with personnel powers — only Gregg Popovich, Doc Rivers, Stan Van Gundy, Thibodeau, and currently do — you have deal with what your bosses give you.

Hoiberg was hired to revolutionize the Bulls’ offense. His bosses have not given him the personnel to accomplish that. In fact, they have done the opposite.

On a basic level, this is just plain malpractice by the Bulls front office. If you pay a coach $25 million to do something, you should give him the tools to do that thing. When he fails to do what was asked of him immediately because you gave him the wrong tools, don’t blame him. Reconsider your decisions, perhaps by considering trading some of the players who don’t fit.

Instead of sculpting a roster to help usher in the Hoiberg-Butler era as Derrick Rose and Joakim Noah moved on, the Bulls front office opted for win-now mode, signing Wade and Rondo. Now Rondo has been benched and will potentially be waived, and Wade is being wasted as Butler’s sidekick. So the Bulls are not winning now, the Hoiberg revolution is further delayed and the team may cut bait and eat salary anyways. What a waste of time and resources.

The Bulls front office — John Paxson and Gar Forman — have some real hits on their résumé, including drafting Butler No. 30 overall in 2011. But at some point they are the problem, not their coaches. If you want Hoiberg to make you a beef bourguignon, stop buying him hot dogs.

Rondo is just a perfect example of the Bulls’ front office having no idea what they were doing this summer. They needed a point guard after trading Rose and while chasing Wade. But with Butler in place and maybe Wade too, you need defense and shooting at the point. You need to avoid ball-dominant point guards at all costs. So ... the Bulls handed a big paycheck to Rondo, a ball-dominant point guard who can’t shoot and hasn’t played consistent defense in half a decade. Oh, and two straight teams had given up on him within a season of acquiring him. Now he’s sulking on the bench and Chicago has no back-up plan at the point.

If Jerry Reinsdorf cared at all about his basketball team, he’d prevent Paxson and Forman from firing Hoiberg until they can explain what the hell they were thinking this summer. This is front office malpractice, not a bad coaching performance.

This article has been updated to more accurately reflect the Bulls’ free agency timeline.