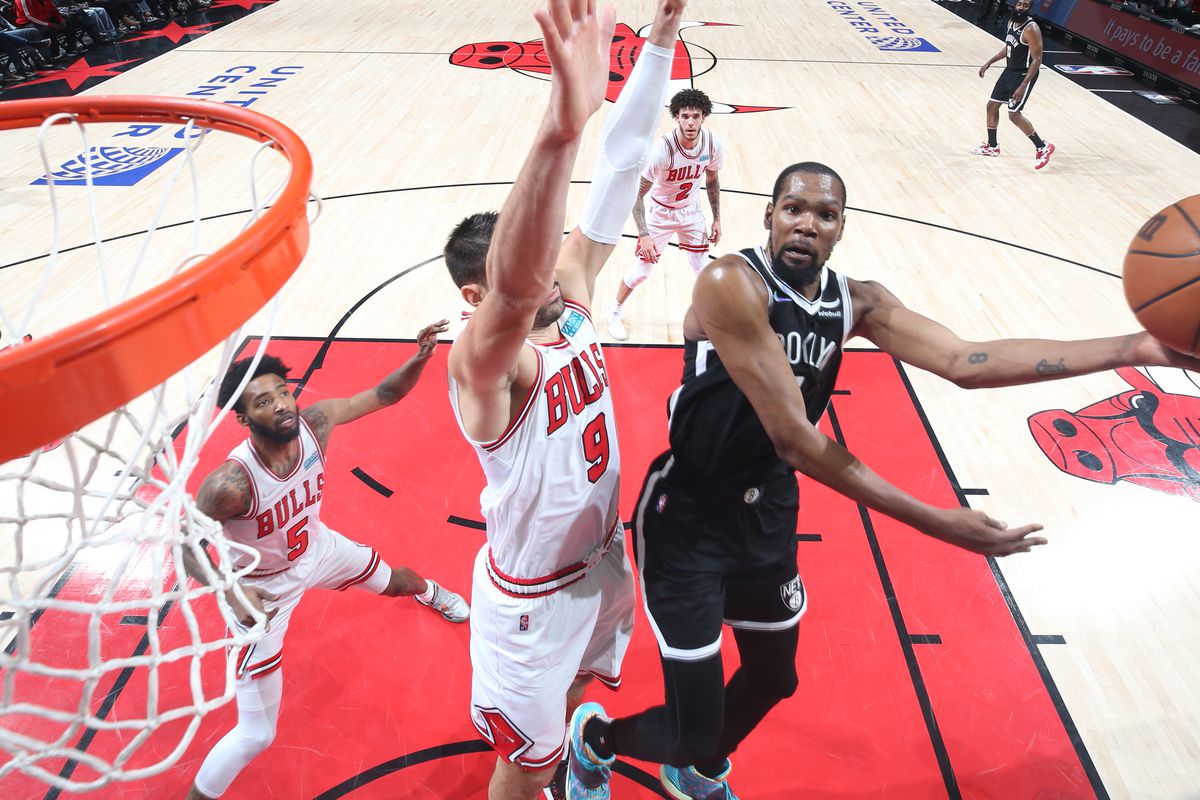 Kevin Durant scored 27 points, James Harden had 25 points and a season-high 16 assists and the Brooklyn Nets routed the Chicago Bulls 138-112 on Wednesday night in a matchup between the Eastern Conference’s top two teams.

Durant had 17 points in the third quarter. The second-place Nets outscored East-leading Chicago by 20 in the quarter to silence a raucous crowd and came away with the win with all three of its superstars in the lineup for just the second time this season.

Kyrie Irving scored nine points in his third game. The seven-time All-Star has refused to get the COVID-19 vaccine and is barred from suiting up in New York due to the city’s mandate.

But Durant dominated over 30 minutes and finished with nine assists. Harden hit five 3-pointers. Patty Mills scored 21 points and was 6 of 8 from beyond the arc, helping Brooklyn come out on top after losing five of seven.

Zach LaVine scored 22 points for Chicago, and DeMar DeRozan had 19.

Harrison Barnes added 23 points and seven rebounds for the Kings.

Robinson threw down three dunks in a powerful third quarter for the Knicks, who won for the fourth time in five games and returned to .500 at 21-21. He shot 9 for 10 from the field and had 10 rebounds.

Julius Randle finished with 17 points, 12 rebounds and eight assists. Booed in the last game after holding his thumb down to the crowd last week.

Luka Doncic had 21 points and 11 rebounds for the Mavericks. Dallas remained without coach Jason Kidd and former Knicks All-Star Kristaps Porzingis because of health and safety protocols.

PHILADELPHIA (AP) — Gordon Hayward made his first nine shots and scored 30 points and Charlotte beat Philadelphia to snap a 16-game losing streak in the series.

Joel Embiid scored 31 points for the fifth straight game for Philadelphia. The 76ers had won seven in a row.

Darius Garland had his first triple-double with 11 points, a career-high 15 assists and a career-high 10 rebounds. Lauri Markkanen added 20 points, Kevin Love had 16, and Eric Mobley finished with 15 points, 10 rebounds and seven assists. Cleveland improved to 3-1 on its six-game trip.

Myles Turner had 18 points for Indiana. The Pacers have lost two in a row and eight of nine.

Washington has won three in a row, and the Wizards won for a second consecutive night without star guard Bradley Beal, who was out because of health and safety protocols.

Cole Anthony had 19 points, 11 rebounds and nine assists for the NBA-worst Magic. They have lost 10 in a row.

ATLANTA (AP) — Tyler Herro had 21 points and Miami scored the first 16 points of the second half to break open a close game against Atlanta.

Herro added 11 assists. Caleb Martin had 18 points to help the Heat finish 4-2 on a trip.

Dejounte Murray had a career-high 32 points for the Spurs. San Antonio has lost four straight and seven of eight.