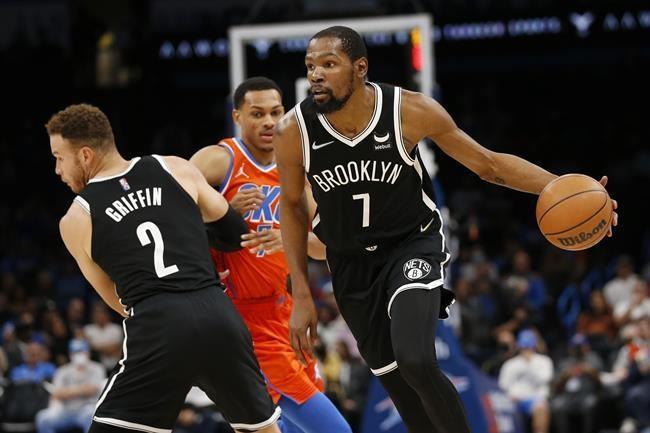 Durant played eight seasons in Oklahoma City, winning four scoring titles and an MVP award and leading the Thunder to the NBA Finals once before joining Golden State in 2016. Thunder fans still haven’t forgiven him for leaving in free agency. He was booed during pregame warmups and whenever he touched the ball early in the game.

It didn’t affect him — the league’s scoring leader made 9 of 17 field goals and had eight rebounds. He helped Brooklyn take the energy out of a crowd that was spirited early on. Brooklyn has won eight of nine overall, including five of six on their trip.

Patty Mills scored 29 points and made a career-high nine 3-pointers, and James Harden added 16 points and 13 assists for the Nets.

The Nets led 61-48 at halftime behind 18 points from Durant. Oklahoma City cut itto eight on a 3-pointer by Gilgeous-Alexander in the third quarter, but the Nets pushed it to 90-74 by the end of the third quarter.

Oklahoma City had overcome deficits of 16 or more points in four of their five wins this season, but the experienced Nets never allowed the Thunder to put anything significant together late.

Thunder: Mike Muscala, one of the Thunder’s top sparks off the bench this season, rested. ... Rookie Aaron Wiggins made his Thunder debut. He had three points, four rebounds and four assists in 21 minutes. ... Dort picked up four fouls in the first half and finished with five.