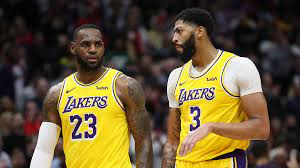 Given all that talent — LeBron James leading the way, with a half-dozen players on the roster with at least reasonable chances of one day being elected to the Basketball Hall of Fame — it’s easy to see why the Lakers would be a fashionable pick to emerge as the Western Conference representative in the NBA Finals this season.

“I’m excited for what’s in store for us this year,” James said. “But every day is a process. Every day, it’s all about the journey and then you just put in the work.”

James and Anthony Davis are back from the team that won the 2020 NBA championship — two seasons, yet only 12 months ago. Talen Horton-Tucker was also on that team, but didn’t play in the NBA Finals. Everyone else is new, or sort of new, to the Lakers.

Rajon Rondo and Dwight Howard were on that team, left the Lakers and since returned. Russell Westbrook, Carmelo Anthony and DeAndre Jordan were among those added this offseason.