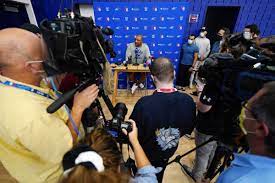 This much is known: Ben Simmons is back in Philadelphia. But there’s no clear sign yet the All-Star guard is set to rescind his trade request and actually play for the 76ers.

Even coach Doc Rivers — publicly, at least — says he’s unsure of the status of the trade demand, the latest wrinkle in the on-again-off-again relationship between Simmons and the Sixers.

“I don’t know. He’s voiced that, but we’ll see how that works out,” Rivers said Wednesday at team practice.

A rescinded request seems improbable, though Rivers said Simmons “was great, he was good” when the two met on Tuesday, a day after the three-time All-Star surprised the franchise by showing up to its arena during a preseason game to take a COVID-19 test.

Rivers said Simmons was scheduled to return to the practice facility late Wednesday for an individual workout and will not practice with the team until he clears NBA health and safety protocols.

That is, if Simmons returns to play at all.

That’s still a big if for the Sixers, especially with one more preseason game Friday at Detroit before next week’s season opener at New Orleans. Much like Marshawn Lynch at a Super Bowl media day, Simmons may be here only so he won’t get fined. The 25-year-old from Australia has four years and $147 million left on his max contract — though the 76ers placed in escrow $8.25 million due to the guard, and fines for missing games and practices could be subtracted from that amount.