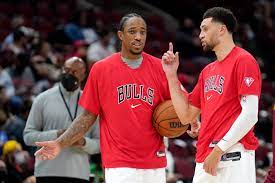 Playing on an Olympic championship team was an experience Chicago Bulls star Zach LaVine will never forget. The high-scoring All-Star hopes the winning doesn’t stop there.

He would love nothing more than to make the playoffs at long last, and the Bulls might be in position to do just that.

After trading for two-time All-Star center Nikola Vucevic at the deadline last March, they added four-time All-Star DeMar DeRozan and point guard Lonzo Ball in the offseason. All those moves have the Bulls thinking better days are coming.

LaVine has never played on a team that made the postseason. It’s something he hopes to change in his eighth year in the league and fifth with the Bulls.

LaVine set career highs last season in points per game (27.4), field-goal percentage (50.7) and 3-point accuracy (41.9%) and made his first All-Star team. He followed that up with a gold medal playing for the United States in Tokyo, an experience he said was “incredible.”

Now, he has his sights set on making the Eastern Conference playoffs. And so do the Bulls, after four straight losing seasons.