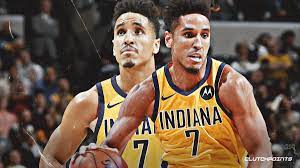 Kevin Pritchard made his offseason desire clear: The Indiana Pacers president of basketball operations wanted someone to emerge as a locker room leader and he wasn’t sure whether that player was on the roster at the end of last season.

By the time training camp opened, Pritchard thought he had found an answer in Malcolm Brogdon.

“Over the summer, I think one started to emerge,” he said. “We had a few players get together a couple of times this summer and one player kind of organized that. That was Malcolm. We don’t have that, we call it an alpha guy, out there, whose pounding the table on anything but I think we’ll have a bunch of guys step up and it will be more team leadership, community leadership.”

New coach Rick Carlisle believes Brogdon is a natural in the leading role.

Brogdon’s great grandfather was a pastor and civil rights advocate. His grandfather marched with Martin Luther King Jr.. His father, Mitchell, is a lawyer and mediator, and his mother, Jann Adams, is an associate vice president at Morehouse College in Atlanta.

Brogdon’s resume includes a master’s degree in public policy and leadership from the University of Virginia and a charitable foundation that promotes education and clean water in Africa.