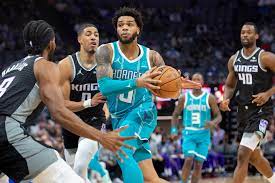 The full schedule for the NBA’s 75th anniversary season was released Friday, highlighted in part by what will be a yearlong tribute to some of the key moments in league history.

Opening night is Oct. 19. It’s back to a normal schedule for the NBA, with all teams playing 82 games after a 72-game slate last season

because the calendar was compressed due to the coronavirus pandemic. The Toronto Raptors will play at home after relocating to Tampa, Florida, last season because of Canadian border restrictions.

The NBA has prioritized player rest over the past several seasons, a trend that continues this year. Teams on average will travel about 43,000 miles (69,000 kilometers), which would be a record low for a 30-team, 82-game season. Single-game road trips are down to about seven per team, a considerable drop from about 10 per team two seasons ago.

Also back from last season: There will be instances of teams playing two games on one trip to a city against the same opponent, something many teams enjoyed. There also are multiple instances of Eastern Conference teams flying to Los Angeles and playing both the Lakers and the Clippers on that leg of a trip.

And for the fourth consecutive normal season, excluding last year’s slate, no team is being asked to play four games in the span of five days.

A breakdown of some of the season highlights:

New York will play host to Toronto on Nov. 1, exactly 75 years to the day after the Knicks visited the then-Toronto Huskies in the first game of the Basketball Association of America’s inaugural season. The BAA was rebranded as the NBA three years later.

New York, Boston and Golden State (which began as the Philadelphia Warriors) are the only three franchises that have been part of all 75 NBA seasons, and they’ll all face off in mid-December in nationally televised games. Golden State is at New York on Dec. 14, then the Warriors play at Boston on Dec. 17, and the Knicks visit the Celtics on Dec. 18.

The Raptors haven’t played in Toronto since Feb. 28, 2020. They’ll be back on Oct. 20 against Washington. The NBA gave the Raptors five home contests in their first six games of this season, so there will be plenty of time for Toronto fans to see their team again finally.

The NBA revealed the Dec. 25 games earlier this week: Atlanta at New York, Boston at Milwaukee, Golden State at Phoenix, Brooklyn at the Los Angeles Lakers and Dallas at Utah.

The NBA will celebrate Martin Luther King Jr. Day with an all-day, 12-game slate on Jan. 17 that includes the traditional home games for Memphis and Atlanta: New Orleans at Boston, Charlotte at New York, Philadelphia at Washington, Brooklyn at Cleveland, Chicago at Memphis, Indiana at the Los Angeles Clippers, Milwaukee at Atlanta, Portland at Orlando, Toronto at Miami, Oklahoma City at Dallas, Phoenix at San Antonio and Utah at the Los Angeles Lakers.

If the Falcons, Patriots, Vikings or Colts make the Super Bowl, fans in those cities may find themselves watching an NBA game instead of an NFL pregame show. The only two NBA games on Feb. 13 this season are Atlanta at Boston and Minnesota at Indiana.

As expected, the 2021 NBA Finals rematches between the Milwaukee Bucks and Phoenix Suns will be nationally televised. Milwaukee goes to Phoenix on Feb. 10; the Suns visit the Bucks on March 6.

The Knicks will be part of another milestone game on March 2: They’ll visit the Philadelphia 76ers exactly 60 years after Wilt Chamberlain scored 100 points to lead the Philadelphia Warriors past the Knicks in a game played at Hershey, Pennsylvania.

The NBA has no games scheduled for Nov. 25 (Thanksgiving), Dec. 24 (Christmas Eve) and April 4 (the date of the NCAA men’s basketball Division I national championship game). The last games before the All-Star break are Feb. 17, All-Star weekend is Feb. 18-20 and then no games are played again until Feb. 24.

Kyle Lowry returns to Toronto for the first time as a member of the Miami Heat on Feb. 3. Lowry spent nine seasons with the Raptors, helping them win the 2019 NBA title. He joined the Heat in a sign-and-trade earlier this month. The first time Lowry will oppose the Raptors is Jan. 17 in Miami.

The San Antonio Stock Show and Rodeo returns Feb. 10-27 — and that means the Spurs are packing their bags for a long time. They’ll go 27 days between home games, from Feb. 4 through March 3, playing eight road games in a span that also covers the All-Star break. (The All-Star Game is Feb. 20 in Cleveland.) San Antonio also has an unusual stretch earlier in the season: a seven-game road trip from Dec. 31 through Jan. 10, followed by a seven-game homestand from Jan. 12 through Jan. 23.

The Lakers and Clipper must vacate Staples Center for the last couple of weeks of January in preparation for the Grammy Awards on Jan. 31. The Lakers play six consecutive road games in that span, the Clippers eight in a row — and when the Clippers finally do get back home, they’ll play host to the Lakers.

The NBA said 46 weekend games will air in prime time in Europe, the Middle East and Africa.

All 30 teams are scheduled to play April 10, the final day of the regular season. The play-in tournament begins two days later and continues through April 15. The playoffs begin April 16, and the 2022 NBA Finals are scheduled to start June 2.