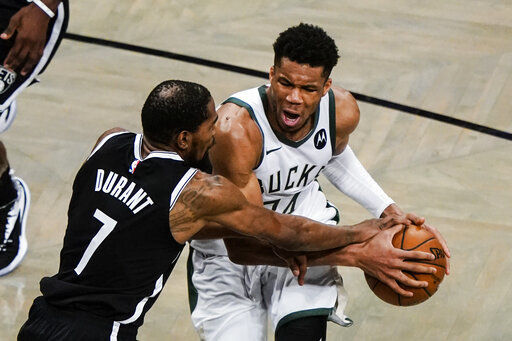 There’s more than a berth in the NBA Finals at stake when the Milwaukee Bucks and Atlanta Hawks square off for the Eastern Conference championship.

The winner of the series that starts Wednesday also will end decades of frustration.

“This is obviously a great chance, a great opportunity for us,” Bucks center Brook Lopez said. “But what is it, you can’t put the cart before the horse or whatever? We’ve got a lot of business to take care of still. We’ve got to go get Game 1.”

The Bucks got here by sweeping the Miami Heat and surviving a seven-game series with the second-seeded Brooklyn Nets. Atlanta beat the New York Knicks in five games and knocked off the top-seeded Philadelphia 76ers in seven.

Both the Bucks and Hawks ended their second-round series by earning their first Game 7 road victories ever.

It’s been an impressive turnaround for the Hawks, who were 14-20 and 11th in the East standings when they fired coach Lloyd Pierce at the beginning of March. The Hawks closed the regular season by going 27-11 under Nate McMillan and have followed that up with an 8-4 playoff record.

Trae Young has led the way by scoring 29.1 points per game in his first postseason.

The Hawks are in the playoffs for the first time since 2017. The Bucks are more accustomed to this stage.

Milwaukee posted the league’s best regular-season record in 2019 and 2020 but couldn’t translate that success to the postseason. The Bucks blew a 2-0 lead to Toronto in the 2019 East finals and lost in the second round to Miami last year.

“I try not as much to focus on the past and what happened,” Bucks forward and two-time MVP Giannis Antetokounmpo said. “I learn from it and I just move on. This is a totally different series, different scenario, different players, different time. It’s going to be hard. It’s not going to be easy.”

Mike Budenholzer coached the Hawks from 2013-18 before leaving for Milwaukee. Budenholzer led the Hawks to their last Eastern Conference finals appearance in 2015, though they were swept by LeBron James’ Cleveland Cavaliers.

But the Hawks have changed quite a bit since Budenholzer’s departure. John Collins is the only Hawk who played for Budenholzer in Atlanta.

“This is about the Bucks and Hawks,” Budenholzer said. “Our players have got to be ready to play. Coaches coach. At this stage, this time, it’s just about playing and finding a way to win and compete and do whatever it takes. That’s really all this is about.”

Of the 16 teams that reached the postseason, only the Bucks have gone undefeated at home during the playoffs. The Bucks own a 5-0 home playoff record this year and have an overall playoff record of 11-2 at Fiserv Forum.

The Bucks’ homecourt edge could face its biggest test in this series. The Hawks are 5-2 in road playoff games this season after going 2-1 at Madison Square Garden and 3-1 at Philadelphia.

The Bucks went 2-1 against the Hawks in the regular season. They won the lone game and split two meetings in Atlanta.

But it’s tough to read too much into those matchups because the Hawks weren’t at full strength for any of them.

Hawks guard Bogdan Bogdanovic played in Game 7 of the 76ers series despite dealing with a sore knee. McMillan said Tuesday the knee is “still a little sore.”

“We’ll get news on him and we’ll see his availability tomorrow night,” McMillan said.

Bogdanovic nearly ended up playing for the Bucks this season instead.

The Bucks reportedly agreed on a sign-and-trade that would have brought Bogdanovic and Justin James to Milwaukee while sending Donte DiVincenzo, D.J. Wilson and Ersan Ilyasova to the Sacramento Kings.

The trade fell through and the Bucks lost a 2022 second-round pick after the NBA determined they held discussions with either Bogdanovic or his agent before it was allowed under free agency rules.

Bogdanovic ended up in Atlanta when the Kings didn’t match the Hawks’ four-year, $72 million offer sheet.