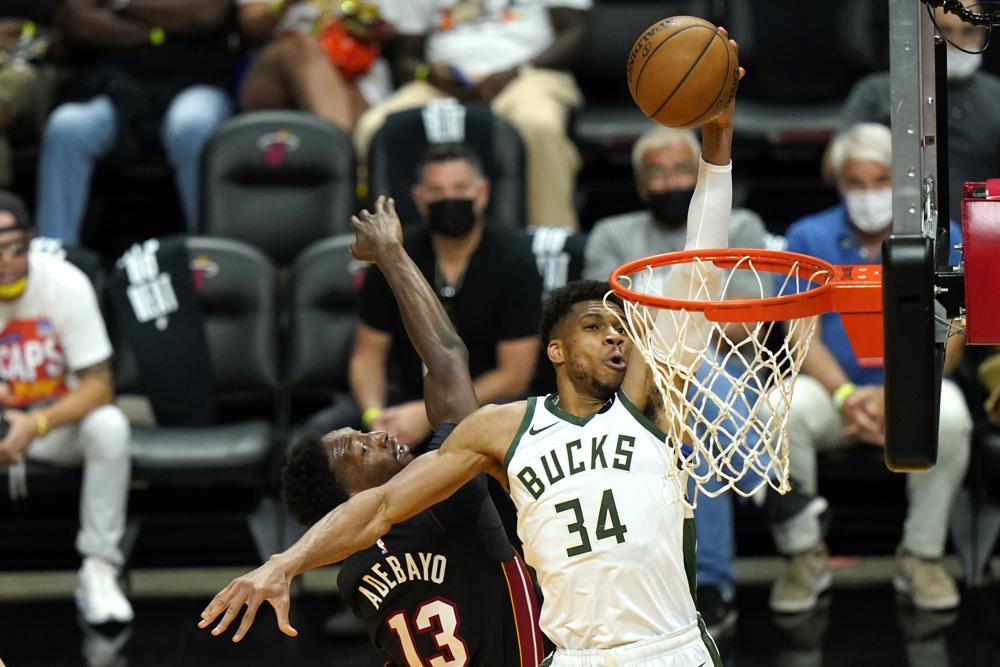 MIAMI (AP) — Turns out, there was a reason the Milwaukee Bucks weren’t worried about a playoff rematch with the Miami Heat in Round 1 this year.

The last four games proved why.

Brook Lopez scored 25 points, Giannis Antetokounmpo had a triple-double — 20 points, 12 rebounds and 15 assists — and the Bucks became the first team to advance in this year’s playoffs, beating the Heat 120-103 on Saturday and finishing off a first-round sweep over last season’s Eastern Conference champions.

Bam Adebayo had 20 points and 14 rebounds for Miami. The Heat became the second team in this playoff format to go from sweeping in the first round one year to being swept in the first round the next. The only other team to endure that was then-New Jersey Nets, who swept New York in 2004 and lost 4-0 to Miami in 2005.

PORTLAND, Ore. (AP) — Norman Powell matched his career playoff high with 29 points and Portland beat Denver in Game 4 to even the series.

Powell made four 3-points and was 11 of 15 from the floor, and CJ McCollum added 21 points for the sixth-seeded Trail Blazers.

Game 5 is Tuesday night in Denver.

Nikola Jokic finished with 16 points and nine rebounds for third-seeded Denver before sitting out the final quarter.

Portland star Damian Lillard was 1 for 10 from the field but finished with 10 points, 10 assists and eight rebounds. He sat out the fourth quarter.