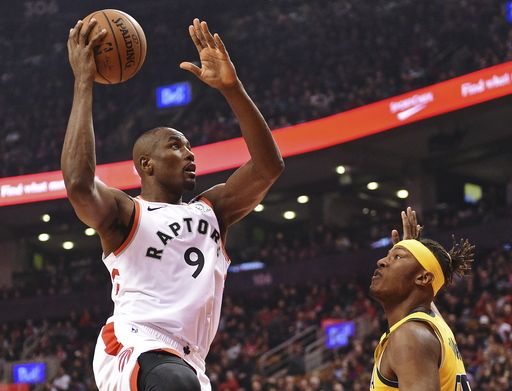 Forgive us for thinking this might be a trap game for the Toronto Raptors.

With a much-anticipated game against the Milwaukee Bucks coming on Tuesday, the Raptors had a game in front of them against an opponent they’ve seen plenty of over the last month — the Indiana Pacers. The Raptors and Pacers had two close games to look back on and consider when setting this one up. The first was an overtime win for Indiana against a beat up Raptors team, the second was a wild comeback where Toronto found a way to steal a win.

There was no need to steal anything on Sunday night and no need to panic about trap games, either. The Raptors led from opening tip to closing buzzer, scoring 13 points before the Pacers could even score a field goal and ending it with a franchise record 46-point victory margin, 127-81. It was quite a way for Nick Nurse to earn his 100th win as a head coach.

Leading the way for Toronto was Pascal Siakam, who had 21 points on 12 shots. Serge Ibaka had a monster double-double with 15 points and 15 rebounds, while Kyle Lowry — only needing to play 32 minutes — had 16 points, 11 assists, seven rebounds, and five steals.

The Pacers? Their starters went 5-for-31 from the field in the first half alone and only three players cracked double digits — led by Domantas Sabonis and Aaron Holiday with 14 points each.

The game opened slowly for Indiana, who headed in without the services of Victor Oladipo. Serge Ibaka scored the first seven points for Toronto, who built a 17-3 lead before the Pacers called their first timeout. After having the chance to talk things over, this happened.Oh no.

Missing their first nine shots, Indiana would go just 4-for-23 overall in the first, basically the opposite of starting the game on the right foot. The Raptors went into the second up 34-12.

At this point, Nick Nurse started to strut around a little bit with his lineups, playing OG Anunoby and Rondae Hollis-Jefferson together in the frontcourt against Myles Turner and Sabonis for Indiana. Undersized but never out-hustled, the two looked dynamic on both ends of the floor, cutting and slicing for easy baskets.

The two would combine for just 19 points in the game, but did enough damage to stretch Toronto’s lead to a massive 63-32 margin at halftime. The Pacers highlights were all lowlights, as their starters amassed just five field goals in the first half and shot 23/26/62 as a team. I’m not kidding.

In the third, the Raptors and Pacers played pretty even as Toronto’s starters started to wind down for the evening. It was actually a bench lineup of Raptors 905 guys who livened up the game in the fourth and made this a franchise record margin.

With Matt Thomas swishing 6-of-8 shots to score 17 points and Chris Boucher notching four blocks, there was plenty to like as the Raptors ran up the score on the Pacers, making this anything but garbage time ball.

Even Paul Watson did something spectacularA late three from Malcolm Miller gave the game its final margin, as the Raptors also got a standings boost by the Lakers beating the Celtics earlier in the day. With a 2.5 game lead on Boston for second in the East, they head into a matchup with Milwaukee with a little more ease of mind.

That game goes down Tuesday night