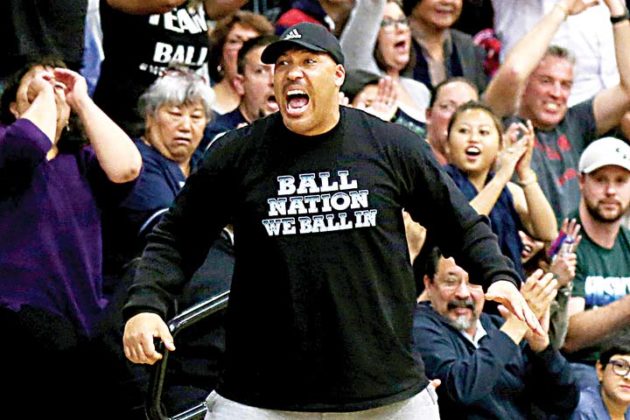 Ball, the outspoken father of Lakers point guard Lonzo Ball, made his latest outlandish statement to ESPN for a story published last Sunday. He said Walton is too young to coach and “has no control” of the team—comments that Walton said didn’t bother him, but ones that clearly angered some of his National Basketball Association (NBA) coaching colleagues.

“ESPN is an NBA partner, and they’ve been a great one,” Carlisle said. “Part of that partnership is the coaches do a lot of things to help them with access, interviews, all those kinds of things, and, in exchange for that, they should back up the coaches. Printing an article where the father of an NBA player has an opinion that’s printed as anything legitimate erodes trust. It erodes the trust that we built with ESPN, and our coaches are upset.“Luke Walton does not deserve that,” Carlisle added.

Longtime ESPN college basketball announcer Dick Vitale wrote on Twitter that Ball totally aggravates me more than any other personality in my 39 years and lamented that media outlets “enable him to scream his absurd opinions by providing a forum for him.”

The Lakers beat Atlanta, 132-113, last Sunday night to snap a nine-game losing streak. At the team’s morning shootaround, Walton said he is certain that he has the support of the Lakers’ front office and that he was mostly concerned that Lonzo Ball could be adversely affected by his father’s comments.

Walton said before the game that some coaches have reached out to him after the comments.

“They’re all on the same idea of it’s our job as coaches to coach our teams and not be concerned with parents and what other people outside the organization think,” Walton said. “A lot of them have shown their support as far as they know what it’s like coaching young teams and, from what they see, how hard our group plays, just like I do.”

Lonzo Ball did not seem affected one way or another.

“He’s going to speak his mind,” Lonzo Ball said of his father. “He’s not going to change.”LaVar Ball made the comments in Lithuania, where Lonzo Ball’s two younger brothers—LiAngelo Ball, 19, and LaMelo Ball, 16—are now part of a team called BC Prienu Vytautas. LiAngelo Ball left UCLA after getting suspended and arrested for shoplifting during the Bruins’ season-opening trip to China last November, and LaMelo Ball was removed from Chino Hills High in California so he could join the Lithuanian club.

Calling out Walton is just the latest in an ongoing series of sagas.

LaVar Ball has made headlines in the past for, among many other things, insisting that no other team should draft Lonzo Ball except the Lakers, placing a $495 price tag on the sneakers offered by his Big Baller Brand clothing line, saying he could beat Michael Jordan 1-on-1 and getting into a rift with President Donald J. Trump over how LiAngelo Ball was ultimately allowed to return to the US following his shoplifting issue in China.

LaVar Ball’s comments on Walton overshadowed many other storylines in the same piece, including his prediction that LiAngelo Ball will play for the Lakers next season—and that LeBron James will leave Cleveland and join them.

“Get rid of everybody,” LaVar Ball told ESPN. “Give him LeBron and Gelo. You got a two and a three. And it’s a win. It’s a wrap.”

Knicks Coach Jeff Hornacek, whose team was in Dallas to face the Mavericks and Carlisle on Sunday, suggested that LaVar Ball doesn’t know enough about the inner workings of NBA locker rooms to make conclusions on the coaching process.

“Nobody’s with these guys every day, and when they have comments on teams, chemistry, that kind of stuff, they don’t really know what’s going on in the overall picture,” Hornacek said. “Yeah, there probably shouldn’t be many comments from outside.”