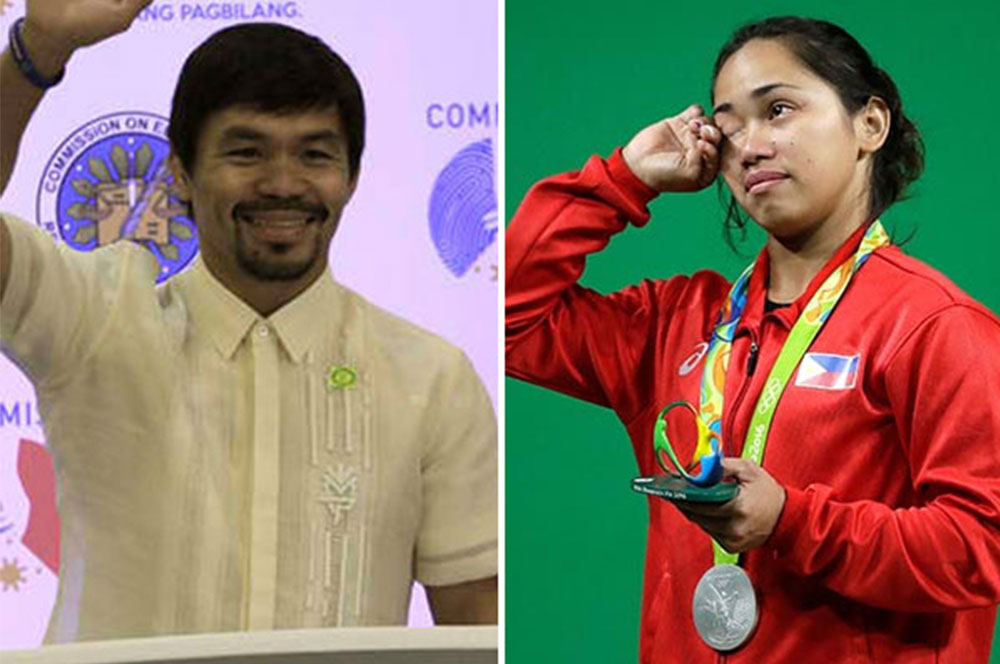 AND it came to pass that a weightlifter would deliver on a memorable year that also saw the historic comeback by San Miguel Beer from 0-3 hole in a series to win a PBA title and Manny Pacquiao’s retirement and subsequent ‘quick’ return to the ring.

Hidily Diaz pitted skills against world class competitors in the Rio Olympic Games but fell short in her bid to gift the Philippines its first ever gold in the long-running quadrennial sports spectacle.

The stocky Zamboanga native, making her third appearance in the Games, gave her best in the women’s 53 kilogram weightlifting event in that Rio Games but she simply fell short and settled for the silver that glittered like gold already for an appreciative, sports-loving nation.

The 25-year old Diaz, who failed to make the podium in her two previous stints in the 2008 (Beijing) and 2012 (London) Games, was not to be denied this time around in this Olympic edition where the athletes’ participation hung in the balance owing to the fear of Zika virus in Brazil.

Diaz became a surprise second behind eventual gold winner Hsu Shu-Ching of Chinese-Taipei after China’s Li Yajun failed to compete in the clean and jerk. The Filipina tallied a combined 200 kgs (snatch and clean and jerk) while Hsu came up with a 212 total, providing the lone bright spot in an otherwise another letdown of an Olympic campaign for the country.

The feat nevertheless ended the decades of frustrations and disappointments, and more so, it showed too that Filipinos can compete against world class athletes in the  greatest show on earth.

The silver medal was the first for the Filipinos in the last 20 years or since a mean boxer from Bago City, Negros Occidental named Mansueto ‘Onyok’ Velasco came up with a similar finish during the 1996 Atlanta Olympics.

Diaz became only the third Filipino Olympian to bring home a silver medal – and the only lady at that – after Velasco and another boxer in the late Anthony Villanueva (1964 Tokyo Games).

Her outstanding feat elicited much admiration from different sectors, with no less than President Duterte meeting her upon her arrival from Rio and rewarding her with cash incentives.

The House of Representative followed suit by coming up with a resolution expressing its heartfelt congratulations to Diaz, who received a windfall of close to P9 million in incentive for her Olympic deed.

The year just passed was also memorable one for the San Mguel Beer team that completed an improbable rise from the grave, as the Beermen came out of a 0-3 hole in the best-of-7 series and beat the Alaska Aces four straight to win the Philippine Cup.

Prior to that, no team had ever succeeded in erasing a 0-3 deficit in the best-of-7 series – whether in semifinals or in finals. The Beermen did just that, achieving the feat in a performance that made 2016 a banner year for the league’s only remaining original pioneering team.

Manny Pacquiao meanwhile outclassed old foe Tim Bradley Jr, to score a 12-round unanimous decision in the third and final      installment of their rivalry which the 30-year-old Pacquiao declared as his farewell bout in his storied career.

But no sooner had the Saranggani lawmaker warmed his seat in the Senate than he started to entertain the idea of making a quick return to what he described as his favorite sport.

On Nov. 5 at the Thomas and Mack Center in Las Vegas, Pacman officially came out of retirement and returned to the ring by challenging reigning world welterweight champion Jessie Vargas,

The Filipino easily handled his American-Mexican foe behind a 12-round unanimous decision to win the World Boxing Organization (WBO) version of the 147-pound belt, and became the first Senator to win a world title.

There were controversies too in the past year involving no less than the Philippine Olympic Committee (POC) whose incumbent  president Jose ‘Peping’ Cojuangco snatched his fourth straight term unopposed.

And in so doing, Cojuangco readily demolished Association of Boxing Alliances in the Philippines (ABAP) president Ricky Vargas even before the election could proceed.

Vargas was set to challenge Cojuangco’s 12-year term, but was deemed ‘unqualified’ by the POC election committee for failing to regularly attend the Olympic body’s general assembly.

Worst, the camp of Vargas sought the intervention of the court by seeking a Temporary Restraining Order (TRO) to stop the Nov. 25 polls even at the risk of facing a possible suspension from the International Olympic Committee (IOC). But the TRO was denied and Cojuangco earned another four-year team as POC prexy that will last until 2020.

But there was much to celebrate too, including the country’s successful hosting of the  Olympic qualifying tournament in basketball.

Cage aficionados got the ‘treat’ of their lives in basketball afforded by world-class cagers playing for their mother countries in the FIBA Olympic Qualifier.

Through the  Samahang Basketbol ng Pilipinas (SBP), one of the three qualifiers for the 2016 Rio Olympics was held in the country in the hopes of giving Gilas Pilipinas a better shot of earning a first Olympic berth since the 1972 Games in Munich.

The July 4 to 10 tournament was the first world-class meet to be staged in Manila involving the national team since the 1978 World Basketball Championship.

But similar to the Filipinos’ campaign 38 years ago, the national team also failed to register a win. Gilas gave Tony Parker and France a good fight but faltered in the endgame, and then couldn’t get on track against New Zealand in their final assignment to formally bow out of contention.

France advanced to the Rio Games by beating Canada in the final.