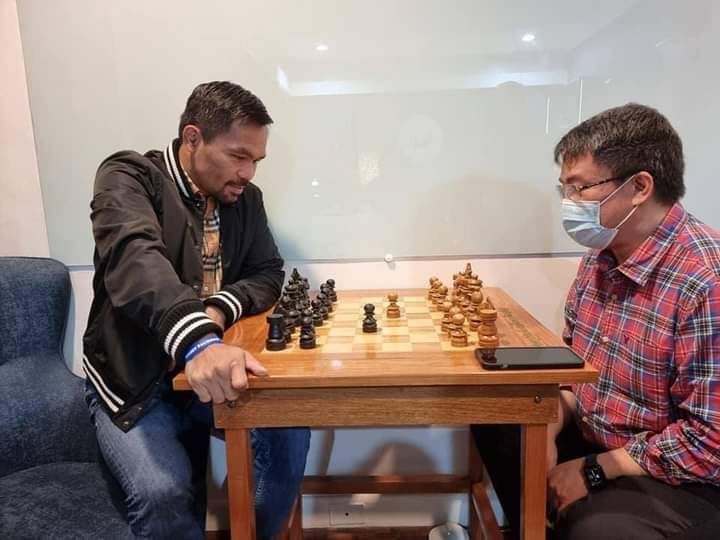 MANILA, Philippines---After hanging his gloves last Wednesday, Boxing star Filipino Manny Pacquiao takes on over an online chess board: a 10-year-old app version of chess king Magnus Carlsen on October 1, 2021.
“It is difficult for me to accept that my time as a boxer is over,” the 42-year-old boxing champion in eight divisions said in a video message posted on his Facebook page.

“I never thought that this day would come,” he added. “Goodbye, boxing.”
The 12-time boxing world champ will make a rare appearance to compete in the Magnus Carlsen Celebrity Charity Challenge.
Pacquiao is one of the latest and biggest names in line to take on the World Chess Champion’s younger self.
The match will be available in real time: https://championschesstour.com and https://www.twitch.tv/allplaychess.
The unique spectacle will be showcased during the Finals event of the $1.6 million Meltwater Champions Chess Tour, the most prestigious event in the online chess calendar including Carlsen and Filipino-American genius Wesley So.
Pacquiao, a Senator here in the Philippines and a chess enthusiats, will be aiming to land the knockout blows in a blitz, 2-minute limit, play-to-finish format.
But so far, no celebrity taking the challenge has beaten Carlsen, the highest-rated chess player in history, on his Play Magnus app. The longest anyone has survived is 49 moves.
Pacquiao who is hoping to raise awareness for the “Stop Asian Hate” campaign. He will receive $5,000 to donate to his chosen charity just for taking part. If he wins the challenge by lasting the longest, or win, he will get an extra $50,000.
Carlsen said: “I can’t wait to see how the legendary Manny Pacquiao does against a 10-year-old me on the Play Magnus app. I wasn’t World Champion back then, but I was already playing decently so it’s going to be hard!”
“I am very much excited to play Magnus Carlsen, the world chess champion. This is something that doesn't happen every day and I will be placed in a different arena this time around," said Pacquiao.
Pacquiao will be raising funds for the Manny Pacquiao Foundation, the charity built on the Senator’s commitment to giving back and fighting for those less fortunate. The foundation uses the hashtags #pacquiaofoundation #pacquiao #jointhefight #bethechange and #teampacquiao on social media.
Pacquiao started his professional boxing career when he was 16 years old.-Marlon Bernardino-
Photo shows Senator Koko Pimentel (right) ponder his next moves against Senator Manny Pacquiao