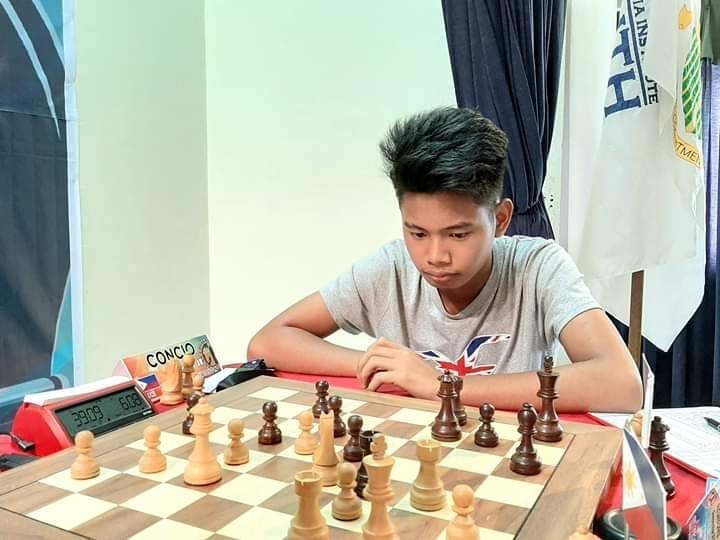 The Dasmarinas City bet Concio, playing under the guidance of national coach Fide Master (FM) Roel Abelgas and Rep. Elpidio "Pidi" Barzaga Jr.drew his last two games and emerged tied for top spot with Amirreza Pour Agha Bala of Iran in the Open under 16 and advance to the world stage (December 19-23, 2020) with Puso and Claros.
Puso, the pride of Cavite, won his last two games to top the Open under 12 division while Claros, a high school sophomore at FEU-Diliman and one of the top player of Grandmaster (GM) Jayson Gonzales toppled Arena Grandmaster (AGM) V Renganayaki of India in the 7th and final round to qualify in the Girls under 14 section.
However, Woman International Master (WIM) Kylen Joy Mordido, another prize fighter of Dasmarinas City chess team failed to advance in the next round.
Mordido finished with 5.0 points in the Girls under 18, the same output of Tianqi Yan of China and Woman International Master (WIM) Nutakki Priyanka of India.
After the tie break points was applied, Mordido landed at fourth, Yan took second while Priyanka settled for third. Xiao Zhang of China topped the Girls under 18 with 5.5 points in seven outings.
Another Filipina, former Adamson University chess team stand out Jarel Renz Lacambra, finished 6th with 4.5 points.
National Chess Federation of the Philippines Chairman/President Deputy Speaker Prospero "Butch" Pichay Jr. congratulates Filipino athletes (Concio, Puso and Claros) for bringing honor to the country after showing excellence in mind boggling sporting events they participated in.
“Thus, I encourage parents to support their children to engage in chess mind boggling sports game and inspire them to always do their best in balancing sports and academics,” said Rep. Pichay.
Rep. Pichay added that the top 3 finishers in each division of the Asian zone will advance to the world stage to be held on December 19 to 23, 2020.
Concio halving the point with countryman International Master (IM) Daniel Quizon in the 6th round then split the point with with Amirreza Pour Agha Bata to tally 5.5 points, the same as Bata, Renjie Huang of China, and IM Rithvik Raja of India, who beat Quizon by winning their last game.
Quizon, on the other hand wound up with 4.5 points for 6th place.
Puso, meantime, subdued Daniyal Sapelov of Kazakshtan and Batsukh Anand of Mongolia to finish with 6.0 points and No. 1 in his division.
Claros, who hails from Pampanga bounced back from a 6th round loss to Laysa Latifah of India, who swept the division, by besting Renganayaki.
Samantha Babol Umayan of Davao City finished 24th place with 2.5 points.
Al-Basher "Basty" Buto of Cainta, Rizal province yielded to eventual champion Sina Movahed of Iran in the sixth round and Barad Yeganegi of Iran in the seventh round and landed 12th in the Open Under 10 with 4 points.
Oshrie Jhames Reyes of Pampanga notch 3.5 poinst for 22nd place while Phil Martin Casiguran of Caloocan City tallied 3 points and ended at 28th spot in the Open Under 10.
Franiel Angela Magpily of Makati City scored 4.5 points for 8th place in the Girls under 10.
Arena Grandmaster (AGM) Christian Gian Karlo Arca of Panabo City, Davao del Norte placed 12th with 4.5 points in the Open Under 12, Mark Jay Bacojo of Dasmarinas City placed 12th with 4.5 points in the Open Under 14 while Paul Matthew Llanillo of Binan City, Laguna finished 16th with 3.0 points in the Open Under 18 category.
Woman Fide Master (WFM) elect Ruelle Canino of Cagayan de Oro City finished 13th with 4 points in the Girls 12 under while Jerlyn Mae San Diego of Dasmarinas City tallied 3.5 points to finished 14th in the Girls 16 under.