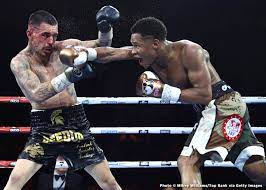 In his second trip to the land Down Under, Devin Haney (29-0, 15 KOs) maintained his position at the top of the 135-pound division with a 12-round unanimous decision victory against George Kambosos (20-2, 10 KOs) on Sunday afternoon at Rod Laver Arena in Melbourne, Australia. “The Dream” retained the undisputed lightweight championship with scores of 119-109 and 118-110 2x.

Kambosos moved erratically in the opening rounds, switching to southpaw at times but always throwing his shots from the orthodox stance. Haney kept his eyes wide open to begin figuring out Kambosos’ movement and used his boxing skills to keep things under control. In the first fight, the jab had been an important weapon, but this time around, the right hand would prove to be just as essential.

Indeed, as the rounds progressed, Haney looked more comfortable and began landing his right hands. The numbers tell the story. According to CompuBox, Haney landed 114 out of 232 power shots, while Kambosos only landed 50 of 181.

Kambosos tried to increase his output in the eighth round, but Haney proved too slippery and accurate, leaving Kambosos a bloody mess in the following round, while Haney only had a minor cut above his right eye. The result of the rematch was the same as the first, but Haney clearly wanted to inflict more punishment.

Haney said, “I knew that he was looking for the jab. So, my team wanted me to show other tools in my arsenal. My dad {head trainer Bill Haney} wanted me to throw the hook more. But I feel that the right hand was what won me the fight tonight. When he first came out, I didn’t expect him to be switching. But I caught on to his timing and his angles, and I started to pick my shots more. Against a southpaw, the right hand is always on the money. That’s what happened.

“He’s a warrior. I take my hat off to George Kambosos and all the Australian fans that came out. Thank you, guys, for giving me so much hospitality here. We take on all comers. No matter who it is, we want to fight the best fighters in the world. I believe I’m the best fighter in the world. Whoever is next, bring him on.”

Kambosos said, “He’s a great fighter. He gave me a good boxing lesson the first time, and I came here and I gave it my all. I had a great preparation. He’s slick, man. He’s a good fighter. He’s slick. I tried my best. I need some rest. Two great fights, you know. It is what it is. I tried my hardest. Devin, I wish you all the best. This is not the end for George Kambosos. I’ll be back.

“I had a great win last year. I was on top the world. I tried to chase the best. He’s one of the best in the world. I’m very appreciative of the opportunity.”

The Australian controlled the fight with his jab and lateral movement. Kaikanha tried to close the distance with power shots as he tried to take advantage of the 79% knockout ratio with which he entered the fight. In the fifth round, Moloney managed to push his opponent against the ropes, where he landed more power shots.

During the following rounds, the pattern remained the same: Kaikanha would try to land with wide shots while Moloney boxed and counterpunched from a comfortable distance. Moloney shined with scores of 118-110 2x and 119-109

“I really enjoyed it. It didn’t feel like the most exciting fight of my career,” Moloney said. “But as my coach says: Win the fight and look good next time. I promise you all that there are more exciting fights to come. We’ve got to wait and see what {Naoya} Inoue does. It looks like he’ll be moving up. So, the WBC title will become vacant, and that’s my dream. The WBC world title is up next.”