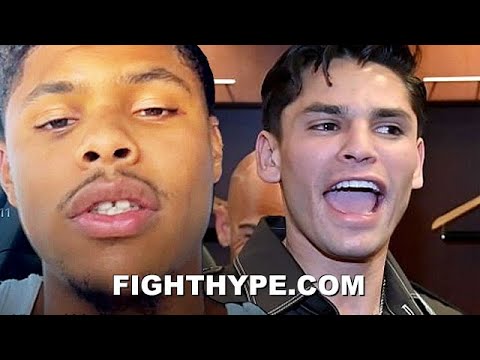 Ryan had said that Stevenson had thrown over 100 low blows in his 12 round unanimous decision victory over Conceicao last Friday night, and he wonders why the referee didn’t do anything to address all the illegal blows.

Stevenson (19-0, 9 KOs) had lost his WBC & WBO super featherweight titles on the scales last Thursday when he weighed in over the limit at 131.6 lbs at the weigh-in. Surprisingly, Shakur didn’t even bother using the two hours given to him to try and lose the 1.6 lbs

“I don’t comment on a lot of fights, but I’m not going to lie, guys. That fight with Shakur [and Robson Conceicao] kind of got me a little p***ed off,” said Ryan Garcia on Social media.

“Not because Shakur won or anything. It’s great. He was supposed to win. it’s the fact that he got away with the most low blows I’ve ever seen someone get away with, and he does it a lot.

“Nothing against Shakur, but you can’t throw that many low blows without realizing that you’re throwing low blows. That ref just missed everything. It was a horrible display of fouls.

“You’re just like, ‘Wow, what’s going on here?’ Again, nothing against Shakur, but you got to keep your punches up. I counted like a 100 of them

“No, Shakur does not wash me. Stop it. He can’t even wash that other guy [Robson Conceicao] that he fought, but he should have got him out of there. He definitely can’t wash me or whatever you were trying to say.

“He’s not knocking nobody out. The worst thing he can do is jab you to death, I guess. Don’t talk about wash. I don’t know if that meant knocked out. Stop lying to yourself,” said Ryan.

“I watched my fight over again. It was a B performance,” said Shakur Stevenson on social media. “I probably should have boxed a little bit more. I didn’t want to be boring.

“I kind of picked up the pace and stepped to him. I could have done more. Ryan just be talking. Don’t worry about him. Nobody pays him no mind. He got a bunch of Instagram followers, but he can’t fight. The real talent always prevails,” said Shakur.