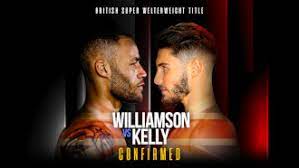 The mouth-watering clash pits North East rivals against each other with Darlington’s Williamson defending his British belt for a second time, against Sunderland hero Kelly.

Probellum fighter Williamson is one of the most exciting fighters in British boxing after engaging in back-to-back Fight of the Year contenders and his clash with Kelly promises to be a domestic dust-up you do not want to miss.

The ‘Trojan’ is on a roll after title wins over Ted Cheeseman and Mason Cartwright while ‘Pretty Boy’ Kelly has been rebuilding his career after a punishing defeat to David Avanesyan last year.

Williamson was left deeply unimpressed with his rival’s last performance and has promised to wear down and stop the 2016 Olympian.

Troy Williamson said: “I’m so happy Josh has agreed to fight me because this is a monster of a fight for British boxing and it will be shown live to a huge television audience.

“But Josh, mark my words, you have made a huge mistake because you have never faced anyone like me, and I will grind you down and stop you.

“Your Olympic pedigree will count for nothing when the going gets tough and I drag you into deep waters.”

Richard Schaefer, President of Probellum, said: “There is no question about Troy Williamson’s status as one of Britain’s most exciting fighters because he delivers drama by the bucket load.

“And this brilliant British title fight with Josh Kelly promises to be another Fight of the Year contender to add to Troy’s collection.

“I was ringside to see Troy get up off the floor and defeat Cartwright on points at Probellum Throwdown and I know this will surpass that fight for action and entertainment.”