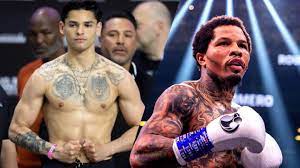 De La Hoya doesn’t sound like he’s going to agree to let the 23-year-old Ryan (23-0, 19 KOs) fight on Showtime with no involvement from DAZN. As such, likely, we won’t see the Davis-Garcia fight unless Espinoza changes his mind about it only being shown on Showtime.

What that means for boxing fans is that they’re likely to see rematches between Tank Davis and Rolando ‘Rolly’ Romero and Isaac ‘Pitbull’ Cruz rather than a fight with Ryan Garcia.

It’s fine if fans don’t mind seeing Tank matches against Rolly and Pitbull again. However, the pay-per-view buys likely won’t be enormous for either of those fights because Tank already beat them.

It’s hard to understand why Espinoza would even bring up the idea of Davis-Garcia fight only taking place on Showtime because there’s no chance in the world that De La Hoya would ever agree to it.

By Espinoza saying this, he might as well have admitted the fight can’t be made because his one-sided approach to making the Davis vs. Garcia fight will never be agreed on by Golden Boy boss De La Hoya.

Espinoza did mention an idea where the first Tank vs. Ryan fight could be shown on Showtime, and the second one would flip flop to DAZN. However, given that Ryan will likely be a huge underdog against Tank for the first fight, it’s not realistic to assume that Golden Boy will agree to that deal.

It’s a great deal if your Tank and Showtime, but a crummy one for the underdog Ryan Garcia.

If things were reversed and Ryan was the huge favorite to win, Golden Boy might be receptive to the idea of Kingry fighting on Showtime for the first fight. Unfortunately, that’s not the case. Ryan is expected to lose and likely by a knockout against Tank.

For that reason, a second fight between them would be irrelevant because it probably won’t take place. The boxing public won’t want to see a rematch between Tank and Ryan if the first fight is a total blowout.

“In my personal opinion, it doesn’t make sense to do a joint pay-per-view,” said Showtime president Stephen Espinoza to Fighthype about him preferring not to do a dual network fight involving DAZN and Showtime.

“I don’t think people appreciate how difficult and painful and time-consuming it is when you have to have mutual approval on every little detail.“Forget the big stuff about how much are you going to spend on marketing and what’s the marketing plan. All that kind of stuff. You remember Mayweather-Pacquiao. That one was such a difficult process.

“Remember, the tickets didn’t go on sale until a week before, and that’s because people have different business practices and disagreements. I’m not saying that would happen with DAZN. I just think we’ve done it in boxing for two fights.

“We’ve did it for Lewis-Tyson, and we did it for Mayweather-Pacquiao. With all due respect to Ryan and Tank, this fight is not that big. It’s not as big as those. There are other ways to resolve this. I think there are other fair ways to do this.
“I think everyone immediately goes to joint pay-per-view. Okay, I understand why DAZN wants that. They want relevance here in the U.S, which they have very little of at this point.

“Having said that, there are plenty of ways of cases to do this. Whether it’s the Munguia situation where you start talking about the rematch for the second fight, and you can flip flop.

“There are cases where what Top Rank did with Lomachenko. They let him go collect a belt on DAZN and come back. From what I’ve heard from DAZN, they’re pretty set on joint pay-per-view [for Gervonta vs. Ryan Garcia].
“I think in their case, they should let him [Ryan] go and collect a belt if they think he’s going to beat Tank, and then come back and continue the rest of his career, and they all live happily ever after.

“That’s my personal viewpoint. Now. I’m not the only opinion in the whole thing. So if the fighters come together and reach an agreement, and I get a call and say, ‘Hey, we’ve reached an agreement with Ryan’s side and Golden Boy, and it’s going to have to be a split pay-per-view.’ Then again, I’m not going to walk away.

“But if you asked me how I would restructure this deal, no, I wouldn’t go down the road for a joint pay-per-view. It’s a good question,” said Espinoza when asked how many pay-per-view buys Tank Davis vs. Ryan Garcia will generate.

“Even Mayweather against Pacquiao and McGregor went way beyond what people expected. So there’s always the potential for the upside, but barring that, let’s look at recent pay-per-view history.

“The high water mark for the biggest fights, putting aside Floyd and Logan, which outsold everything. You put that aside and just talk traditional pay-per-views. Canelo did 800,000 buys, and Fury 2 did 750, and 800 are the two highest purchases.

“By comparison, can it [Davis vs. Ryan Garcia] do Canelo numbers? It’s tough. Canelo has been such a phenomenon for so long. It’s tough to say there are other ones that are going to pop up and match it.

“I would say it’s somewhat short of that. Maybe in the six figures, 400, 500,000 buys. Maybe it’s more. It’s one of those things that catches the imagination. They’ve got two different fan bases, and it can go beyond that.