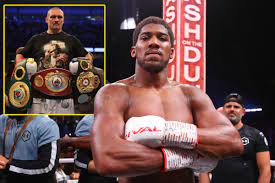 Anthony Joshua says he’ll “dash” [throw away] the three titles he wins off of IBF/WBA/WBO heavyweight champion Oleksandr Usyk on August 20th.
Joshua states that he wants people to “respect” him “as a person,” and the best way to achieve that is not to hold onto the three titles that he hopes to win from unified champion Usyk (19-0, 13 KOs) in their rematch next month in Jeddah, Saudi Arabia.

AJ’s need to be validated by boxing fans for the person he is rather than his belts suggests that he’s insecure & needy. In other words, there’s an empty void in Joshua’s mind that needs to be filled by adoration of him that runs apart from his world titles.

It would be better for Joshua to sit down with a good sports psychologist to help him sort through his need to be legitimized by people.

Boxing is a sport, and the way that fans judge whether fighters are quality is if they win world titles. If Joshua circumvents that process due to his inner hunger to be adored by fans, he will never have that need fulfilled.

After all the talk Joshua, 32, has done over the years about wanting to become the undisputed champion, it seems peculiar that he would vacate his belts when he’s at the precipice of achieving that longstanding goal.

Some would argue that Joshua (24-2, 22 KOs) wants to ditch the three belts so that he doesn’t have to fight WBC champion Tyson Fury for the undisputed championship.

If Joshua dumps the belts immediately after beating Usyk and faces Fury, fans won’t give him as much of a hard time. Fury will still take the fight with Joshua regardless of whether he’s belt-less because he’s cashing out with his career.

You got to wonder about Joshua’s desire to keep fighting. The way he’s talking, it appears he’s money-focused at this point and no longer cares about winning belts.

Joshua has no other choice but to fight Usyk again because of the way he was embarrassed by him last September. If not for that, Joshua would likely swerve Usyk.