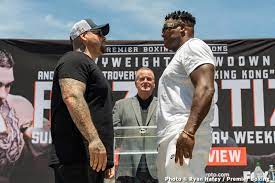 Ruiz-Ortiz will be headlining on FOX Sports pay-per-view on September 4th at the Crypto Arena in Los Angeles, California.

Ortiz will be out to win his third consecutive fight since losing to former WBC champion Deontay Wilder in their rematch in 2019. Ruiz has been the toughest foe for ‘King Kong’ Ortiz since his fight with Wilder, and there are questions about whether he has enough youth left at 43 to win.

We know that a younger version of Ortiz likely would make easy work of Ruiz, but the Cuban talent looked his age in his last fight against Charles Martin in January. Ortiz was decked twice by Martin and had to rally in the sixth to get the knockout.

“Cuba vs. Mexico, two great countries, warriors both. Not one Mexican fighter is a p****. They’re all tough, rugged fighters and have earned their respect,” said Luis Ortiz to Fighthype. “Cubans are the same way. He’s a little throwback of a Mexican fighter.

“Look at my hands. They’re going to do the talking in the ring,” said Ortiz when asked about his age. “Andy is very dangerous; there’s no doubt about that. He’s proved it many times over,” said Ortiz.

“A war between two warriors is what’s expected. I always take experience from every fight. Of course,” said Luis Ortiz to ABN Sports Media when asked if he’ll be looking to get a knockout of Ruiz.

“I think it was the perfect thing to size him up because it was my first time seeing him face to face, and I was just sizing him up,” said Ruiz to Denise Salcedo about his first meeting with Luis Ortiz.

“I got to do the things that we’ve been training and working on and just work hard. It would mean so much, and that’s why we made this training camp longer than usual,” said Ruiz when asked what it would mean to him to become world champion again.

“This is why we picked an opponent that’s not cherry-picking. We know Ortiz comes to bring it. He only has two losses against Wilder. I think this is the opponent I needed to get back on top.

“What I really want to do is have my own promotional company and build fighters and turn them into champions and treat them the way they want to be treated,” said Ruiz.