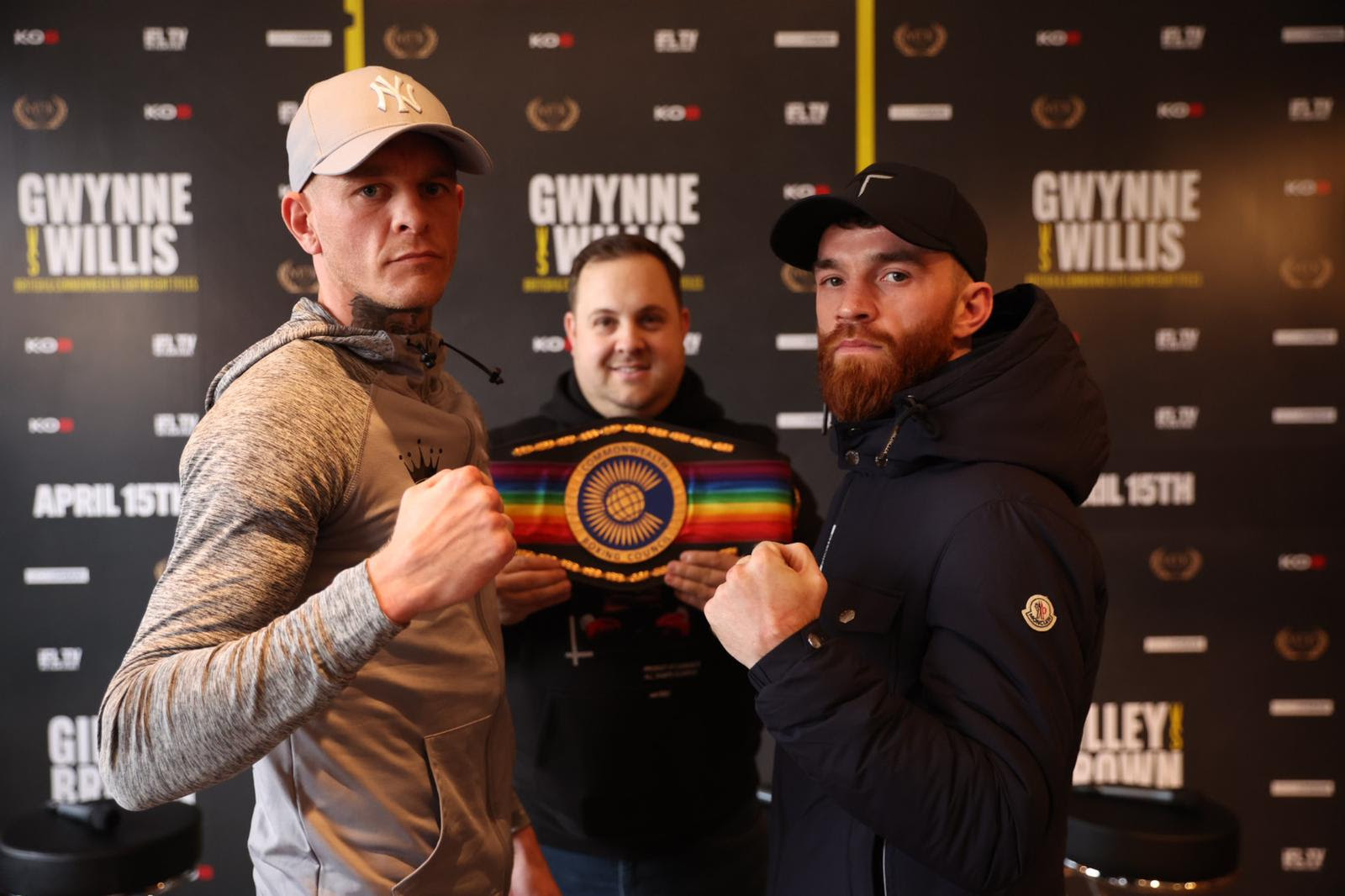 Gavin Gwynne and Luke Willis each made their intentions perfectly clear as they met prior to their British and Commonwealth lightweight title fight on Friday's #MTKFightNight.

This week’s stacked show is broadcast live on IFL TV and takes place at York Hall in London, and also features an English super-welterweight title fight between Sam Gilley and Drew Brown.

The fighters went head to head on Wednesday before Friday's all-important fight night, and here's what everybody had to say.

Gwynne said: "I've put everything into this camp, and I'm leaving on Friday with two belts wrapped around my waist. I can't wait and I wish it was tomorrow. I just want to get in there and fight.

"I think it will be a fight of two halves. One of my strongpoints is my stamina and I could probably do 24 rounds if I needed to. I've always believed in myself, and that's what's got me this third crack at the British title.

"This is my time, and I know what I have to do to win. If it comes by stoppage so be it, or if it's on points that's fine, all I know is I'll be leaving the ring on Friday as the British and Commonwealth champion."

"There is so much talent in Liverpool, and I want to thank Tony Bellew and MTK Global for getting me this shot at the British and Commonwealth titles, I'm going to grab it with both hands.

"This might be my first 12 rounder, but I've prepared for this not only the last 10 weeks, but my whole life. I have never stopped believing in me, and I always felt I would be a champion. On Friday night it happens."

Hughes said: "I feel like I've been training for four months for this fight. I need to get this out the way first so I'm not looking past it, but after this fight, world titles are what I want.

"I'm just really excited to be stepping back in the ring again, so I can't wait for Friday night. I know that I'll be coming out with the win."

Connolly said: "I always want to test myself against the best in the world and when I retire I can say that I've fought the best. I have every confidence in myself and I'm going to put on a cracking performance and go for the win.

"Anything can happen in boxing, one punch changes everything and it comes down to small margins, so I'm excited to go in there and show what I can do."

O'Leary said: "The last time I was fighting was October, and I wanted to spend Christmas with my family. I've been back training really hard since January, and I have a great team around me.

"People haven't seen half of what I can do, and I'm excited that you'll see the best of me soon. It's only a matter of time."

Fail said: "I'm in the gym all year round and I just want to stay busy and stay active. We'll get this opponent out of the way on Friday and then I want to move forward.

"I want to push for titles. I know that I can't run before I can walk, but I believe that I'm ready and I will truly fight anybody."

Richardson said: "It's been two years since my last fight and a frustrating time, but I believe I've made a lot of improvements in the gym while I've been out, and on Friday night I will show it.

"York Hall is a great venue and it's the home of British boxing. I've got another night fighting there and it's going to be another win. We'll get the momentum going again, and then I'm looking for the English title next."

Croxson said: "I can't wait. I have got this opportunity and now it's down to me to perform, and I'm sure I will. I've been in the gym working hard and I'm going to 100% get the win on Friday."

MTK Global Promoter Lee Eaton said: "It's a great card. The top of the bill speaks for itself. British and Commonwealth titles is what fighters are involved in the sport for, so it's going to be a special night at York Hall. Gavin is already the Commonwealth champion, and now he gets his chance to fight for the British title.

"Elsewhere on the card we have Sam Gilley in a great fight against Drew Brown, and also Nina Hughes and Bec Connolly finally getting it on. The winner of that should move on and hopefully go straight into a Commonwealth title fight.

"Pierce O'Leary is back and he is one of the most exciting prospects we have on the roster, and he's one of the nicest kids you'll meet too. After this it will be titles next, and he's going all the way.

"Jimmy Croxson is making his debut, and I've known him since he was a kid, he's grown into a man now, and I'm excited to see him make his professional debut. He'll admit himself he wasn't very good when he started, but he's trained hard and put his whole life into boxing.

"Carl Fail is one of the best young prospects in British boxing. He was on Team GB and is now 5-0 already having taken on some tough tests. He's got another difficult opponent this week, and then we'll maybe look at a Southern Area title eliminator next.

"Dean Richardson has had two years out, but now he's signed with MTK Global and we're looking forward to getting him straight out and then into championship fights in the summer." (PR)