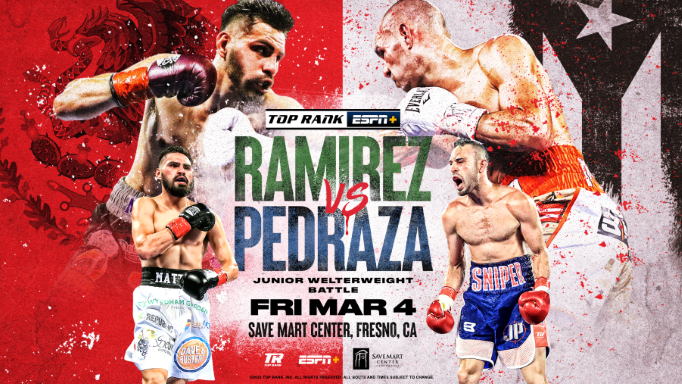 Ramirez and Pedraza were scheduled to fight Saturday, Feb. 5, but Pedraza tested positive for COVID-19.

In the six-round heavyweight special feature immediately before the main event, Olympic silver medalist Richard Torrez Jr., from the Central Valley town of Tulare, California, will make his long-awaited professional debut. The 10-round co-feature will see the Top Rank debut of featherweight contender Joet Gonzalez, who will fight Filipino veteran Jeo Santisima. The entire Ramirez-Pedraza card will stream live and exclusively in the United States on ESPN+.

Promoted by Top Rank, tickets starting at $36 are on sale and can be purchased at Ticketmaster.com. Tickets purchased for the Feb. 5 date will be honored for March 4.