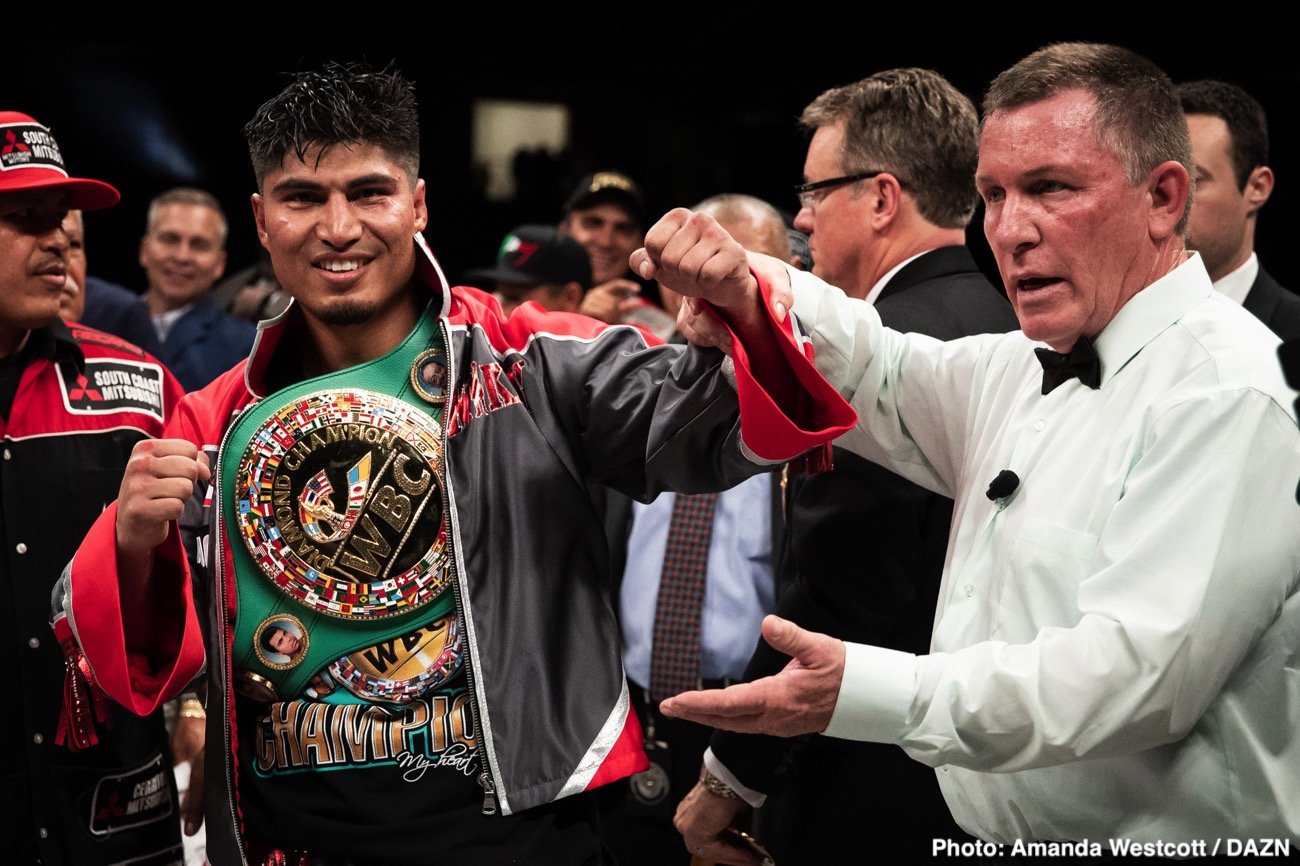 Mikey Garcia isn’t fighting Regis Prograis next because the money that DAZN reportedly offered him was considerably less than what he got in his last fight against Jessie Vargas in February 2020.

That’s a low-risk for Mikey, but he’s not getting the big money he made against Vargas. It’s believed that if Mikey got what he made against Jessie Vargas, he would have agreed to fight Prograis.

It’s believed that Mikey wanted the same kind of money fighting Prograis that he got for the Vargas fight, but the market for what the networks are paying fighters has changed due to the pandemic.

So instead of fighters likely Mikey (40-1, 30 KOs) getting paid the huge money he made against Vargas, he’s going to be given less for what would be a hard fight.

For Mikey to get his pay moved up to what it was once, he’s got to fight frequently, and he’s got to be facing the best.

The Pandemic Has Changed The Market
“The reason Mikey Garcia and Regis Prograis are not fighting is because they were not going to be paid the kind of money they wanted for the fight,” said Keith Idec to Boxing with Chris Mannix.

“They were not going to make combined what Mikey Garcia made to fight Jessie Vargas of February 2020. It was a different world then.

“The pre-pandemic DAZN budget was very different than it is now, and rightfully so because they were grossly overpaying just to get them to fight on DAZN.

“I think now, Mikey Garcia has an overinflated opinion of what his market value is. If he were going to fight Regis Prograis, which would be a difficult fight, he would want to be paid at least what he made to fight Jessie Vargas, even knowing the market has dramatically changed.

If Mikey, 33, thinks he’s going to get the kind of money fighting Prograis that he did against Errol Spence Jr. and Jessie Vargas, he’s dreaming.

Obviously, DAZN got a good look at the subscribes that Mikey pulled in for his fight with Vargas in 2020, and they’re not going to want to dump big money on him fighting Prograis and Sandor Martin.

Fighters Accustomed To Being Overpaid For Bad Fights
“I was talking to a promoter recently about all these fighters that are sitting on the shelf, fighting once a year now,” said Mannix. “These guys have been paid so much money for bad fights over the last few years.

“When you make them an offer for a good fight, it’s not commensurate to what they were making before. They just turn it down.

“I don’t know how this resolves itself because the budgets have been slashed by virtually every network out there.

“Fighters are going to have to decide whether this is what they want their careers to be, once a year maybe or take less money and focus on big fights and earning your way up to those big paydays again,” said Mannix.

Canelo Alvarez is a great example of a fighter making huge money on DAZN for bad fights that the public had no interest in seeing, with him choosing to unify the 168-lb division.

So instead of Canelo facing the fighters, the fans wanted to see him fight in Jermall Charlo, David Benavidez, Gennadiy Golovkin, and Demetrius Andrade; we’ve seen him on DAZN against Billy Joe Saunders, Callum Smith, and Rocky Fielding.

Canelo is still being overpaid for bad fights, as he will be getting $40 million to fight Caleb Plant. That’s not a fight that fans have been asking for.

Mikey Needs To Be Fighting Better Opposition
“As it pertains to Mikey Garcia, I understand he needs to get back in the ring because he hasn’t fought in a year and a half,” said Idec.

“I don’t know how much they’re paying him and Sandor Martin. Why waste the money on that when you can apply whatever he’s being paid for towards a better fight.

“Then you can pay him closer to what he wants for Regis Prograis. I’m not saying fighting Regis Prograis coming off a year, and a half layoff is ideal, but the pandemic affected every boxer and every person on earth in various ways.

“That certainly applies to Mikey Garcia as well. I don’t see the point of putting him in with a guy who will be a 100 to 1 favorite to beat.

“You’ll have the night of boxing to yourself, but I hope they put something good on the undercard.”

“I love the idea of Mikey vs. Prograis. That is a meaningful fight,” said Mannix. “I hope smarter heads can get together.

“Regis seems to really want it. Every time I see him on social media, he’s clamoring for that fight, so hopefully, the finances work out,” said Mannix.

It could be true that Mikey has an inflated sense of his market value due to the crazy money that DAZN paid him for the Jessie Vargas fight.

The $7 million that Mikey reportedly got for the Vargas fight was $5 million more than he probably should have been paid.

Jessie was a decent fighter back in 2016, but he stopped frequently fighting after making a lot of money fighting Manny Pacquiao in 2016. Vargas was no longer relevant by the time Mikey fought him.

Even if Mikey were to fight Vergil Ortiz Jr, $7 million would be way too much.

It’s bad for Mikey if he’s going to ruin the final years of his career, waiting around for the big paydays he got for his fights with Errol Spence Jr. and Jessie Vargas. That’s not going to happen, especially not fighting often.

It appears that Mikey doesn’t understand that he could increase his market value if he stayed in the limelight by fighting top fighters like Regis Prograis, Jaron Ennis, Jose Ramirez, Conor Benn, Shakhram Giyasov, and Gary Antuanne Russell.

Sadly, Mikey will likely sit around and wait a long time, hoping someone like Manny Pacquiao, Spence, Terence Crawford, or Gervonta Davis will give him a fight. It’s not likely to happen, particularly if Mikey chooses not to fight two to three times a year.

At this point, Mikey has already permanently hurt his earning power by his inactivity. I’m not just talking about the year and a half that he’s been out of the ring since his last fight in February 2020.

Mikey was out of action for 2 1/2 years from January 2014 to July 2016 due to having promotional problems when he was with Top Rank.

When Mikey returned, he was fighting at least twice a year until he got a big payday against Spence in 2019. That’s when Mikey started fighting once a year and missing out on fights that would have paid him well.