I’m Not Lying To Myself’

I’m Not Lying To Myself’

I’m Not Lying To Myself’
Boxing 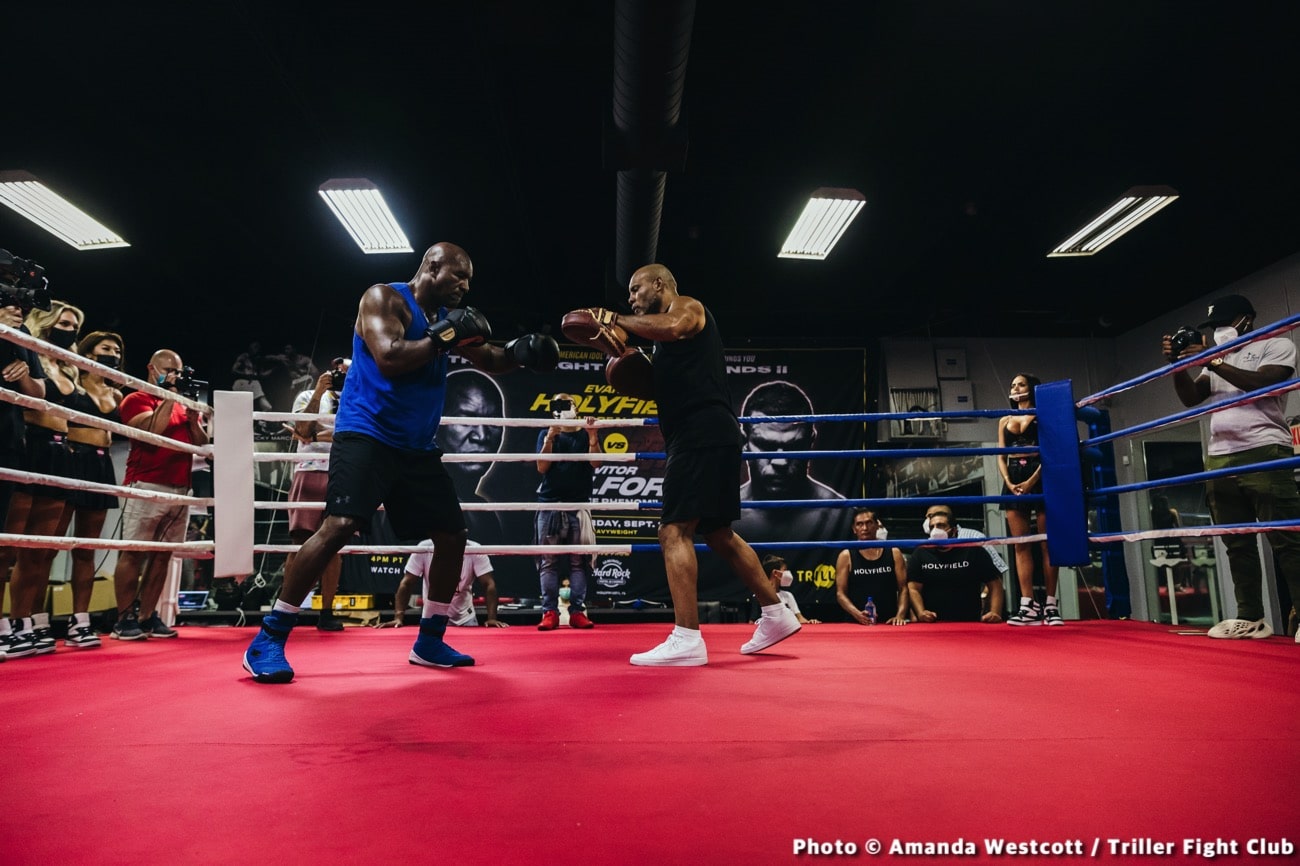 Evander Holyfield insists that he’s not kidding himself in coming back at 58 to take on a dangerous Vitor Belfort this Saturday night in their eight round fight on Triller pay-per-view.

Evander believes he’s still got a little left in the tank, and he’s hoping to use a victory over Belfort to get a much bigger fight against Mike Tyson.

The former heavyweight champion Holyfield feels that he’s still got more than enough boxing skills to defeat the former MMA champion Belfort (1-0, 1 KOs), who isn’t a spring chicken at 44.

In the media workout on Wednesday, Belfort looked pumped up, carrying a lot of muscle and punching with more speed and power than Holyfield.

Belfort has an advantage over Holyfield in that he’s gone through an entire training camp for their fight this Saturday, September 11th, at the Seminole Hard Rock Hotel and Casino in Hollywood, Florida.

The Brazilian was supposed to be taking on Oscar De La Hoya until two weeks ago, but the 48-year-old tested positive for COVID-19 and pulled out of the card.

Holyfield Has His Eye On Mike Tyson
“I feel good, and I am in shape,” said Holyfield to iFL TV. “Because I feel like I can win. That’s why I took the fight. Why not? This is what I do,” said Evander when asked if he could score a stoppage of Belfort.

“I can do it at 58 because I didn’t have a lot of bad habits that other people had. I feel good, and I can do it.

“We weren’t talking about nobody else. If I’m going to do this, I’m talking about somebody where there’s a good chance I can beat him again. Why not the sure thing? I’m not lying to myself. I’m telling myself the truth. I can do this.

As pumped up as Belfort is, he’s likely to gas out quickly if he expends much energy in the early going against Holyfield. Like most MMA fighters, they’re not accustomed to throwing many punches and fighting more than five rounds.

If Holyfield can weather an early storm from the over-muscled Belfort, he should be able to come on in the second half to knock him out possibly.

Holyfield is so slow, though, and it’s questionable whether he has enough speed to win what would have been an easy fight for him if he were still in his 40s.

Evander Is Not Worried About Belfort’s Power
“It depends on the adjustments he makes,” said Holyfield on whether Deontay Wilder can defeat Tyson Fury on October 9th. “You got to go back to the camp and add something else to it.

“Obviously, Tyson Fury added some adjustment, and it worked for him. I think if he [Wilder] doesn’t make an adjustment, the same thing is probably going to happen again.

“Not really because the fact of the matter is I’m a boxer,” said Holyfield to Fighthub when asked if he worried about having only a short amount of time to prepare for his fight with Belfort.

“He’s an MMA guy. It’s like me getting down on the ground with him. I wouldn’t do that, but it takes a lot of heart and courage to transition to fight somebody in something that they do. Boxing is what I do.

“People get sick. This is what happens with everybody, and I wish him well,” said Holyfield when asked about his thoughts on Oscar De La Hoya pulling out of the fight. I don’t know how it got to me [to replace him].

“I can understand,” Holyfield when told that boxing fans are concerned that he could get hurt. “There’s always going to be someone older than somebody in this life.

“You got to put the guy that will bring the people. My goal is to do a good job. That’s it. I can keep from getting hurt in boxing because I know how to cover up.

“I know he’s a tough guy,” said Holyfield about Belfort. “I know if we had to do MMA, I wouldn’t do that. Kicking people. I wouldn’t take a chance because I know I’m not going to win. I like winning.

“If they play your game, you’re supposed to beat them. But if you play their game, there’s a chance they’re going to beat you do. That’s what sports are all about. What kind of chance are you willing to take to prove that you’re the best,” said Evander.

It might be a mistake on Holyfield’s part to assume that he’s going to be able to block the shots from Belfort with some of them leaking through his guard.

Belfort likely going to unload on Holyfield early to try and get a quick knockout, but if that fails to happen, he’ll pace himself. He’s carrying too much muscle right now for him to be able to fight at a fast pace for any length of time, and he’s likely to gas out big time in the later rounds.

Holyfield Reacts To Trump Doing Commentary
“If it can happen, I’m willing to do it,” said Holyfield when asked if he’d like to fight Mike Tyson. “If not, I’m not going to lose anything. I’m not going to go into anything that I don’t feel I’m going to win.

He put on big fights, and I fought there, and he was the president. You have to have respect for the people who have done a good job,” said Holyfield.