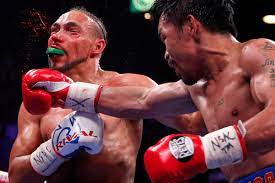 Former WBA/WBC welterweight champion Thurman (29-1, 22 KOs) he’s NOT fighting WBO champ Crawford next, but he will be back in the ring in the summer.

Thurman needs to get back in the ring because he’s been out of action for two years, which he blames on a combination of the pandemic and his hand surgery.

Thurman also cleared up the rumors about him potentially fighting former 147-lb champions Andre Berto or Devon Alexander by saying he’s not fighting those guys. Keith wants a better opponent than those two guys, both of which are long past their prime.

With the hard work that’s involved in getting in shape, the 32-year-old Thurman says he wants a big fight against someone like IBF/WBC champ Spence.

Keith says he doesn’t think Spence is ‘The Truth’ after watching him against Danny Garcia and Shawn Porter, and he wants to be ‘The Truth-detector’ by fighting him.

Spence is still saying he’s not going to fight Thurman because he avoided him for years when he was first coming up the ranks. Now that Thurman is needy, having lost his last fight to Pacquiao two years ago, Spence isn’t interested in giving him a hand up.

For Thurman’s sake, he needs to forget about taking a tune-up fight and focus on facing the best opponent he can get. Thurman has too many long spells out of the ring, making him the forgotten man for the 147-lb division.

It’s hard to believe that Thurman was viewed as the #1 guy at welterweight by many boxing fans from 2016 to 2018.

If he can’t get Spence or Crawford, Thurman should focus on fighting one of these guys:

Vergil Ortiz Jr
Shawn Porter
Danny Garcia
Conor Benn
David Avanesyan
“Not that I know it,” said Thurman to ThaBoxingVoice when asked if he’s fighting Pacquiao next. “There are a lot of rumors going around. Let’s just see what happens.
“That’s why I try and warn you guys. Y’all want to talk about the future and can’t live in the moment. Obviously, they’ve got something planned. Let’s see what happens. I’m trying to get back this summer; that’s all I know.

“Anybody talking about fighting Thurman before the summer, they got the wrong time. Later than August. That’s why they’re rumors,” said Thurman when asked if there’s any truth to the rumors that he’s fighting Andre Berto or Devon Alexander next.

“I would like something a little more [than those two]. I hope so,” Thurman said when asked if this is the last time he’s out of the ring for a long period.

“A lot of my inactivity was injury-based. Once I get moving, I want to say moving. I feel great. No, I didn’t say I want a get-back fight. I put Devon Alexander in that get-back category.

Crawford Less Dangerous To Pacquiao
Chris Williams hears where Thurman is coming from with him, saying that Crawford is less dangerous for Pacquiao than Spence. Crawford is still basically a light welterweight who has been fed beatable opposition since he moved up to 147.

You can’t say that Craword is as dangerous for Pacquiao as Spence, Thurman, Danny Garcia, or Shawn Porter because he’s a pumped-up welterweight.

“Errol is trying to collect all the belts before anyone else can,” said Thurman. “I like the Ugas fight. Trust me; I’m going to be back in the game soon.

Errol Spence Jr Keith Thurman Terence Crawford
“Crawford is a little bit less of a welterweight and a little bit less a danger, but still a threat to Pacquiao. Contract, waiting on it. Coming soon,” Thurman said about his next fight. It’s corona.

“I’ve been alright for a long time. You got to get dates. We don’t got the dates in Florida,” said Thurman on why he’s not fighting in Florida during the pandemic despite many others fighters there.

“In my next fight, hopefully, it’s one of these champions. I’m not stepping on no scale,” said Thurman.

Thurman Says Spence Isn’t The Truth
Spence hasn’t been fighting a lot lately, and his last two performances against Danny Garcia and Porter left a lot to be desired. It’s unclear if the less-than-stellar performances by Spence are a result of him aging or him enjoying himself a little too much in between fights.

We’ve seen Spence’s weight balloon up in between fights, and that’s got to be hard on him. Spence is blowing up between fights just like Adrien Broner and many other fighters in the past. When that happens, it has a way of shortening the careers of the fighters.

“I had it on my To-Do list after Pacquiao to go see Errol Spence. So as long as that boy keeps making weight, I’m gunning for Errol Spence.

“It’s a fight that should be easy to make on this side without drama, and it’s a fight that’s well past due. It’s a tremendous fight in the welterweight division.

“He’s nice but have I seen the truth? And I’m not a spectator. I think Porter pulled it out of Errol to make an entertaining fight.

“We watched Errol fight Mikey Garcia, and that wasn’t entertaining. Where is the Truth? Come see me, and the Truth shall be revealed. I’m the truth detector in the welterweight division,” said Thurman.

It would be shocking if Spence gives Thurman the fight that he’s asking for, even though it’s in his best interest to do so.

If Spence looked at the big picture, he’d fight Thurman as soon as possible because he’s not going to be around too much longer. Thurman is too injury-prone, and he lets his weight get out of hand.

One gets the sense that Thurman isn’t into boxing like he once was now that he’s tasted some money.

Keith Denies Asking For $10M For Crawford Fight
“I like a lot of stuff he was doing when he was dominating earlier. 70-30 split?” said Thurman when asked if he’d accept a 70-30 split for a Spence fight.

“I don’t think it’s going to pop up like that. I definitely want to have that fight [with Spence] on my resume. Once we got to the negotiating table, we’re going to find the middle ground, and we’re going to make great fights happen.

“Never,” said Thurman when asked if he asked Top Rank for $10 million to fight Crawford.

“What are you willing to pay me? I don’t have to tell you what to pay me. I want to get back in the ring to fight Errol Spence,” said Thurman.