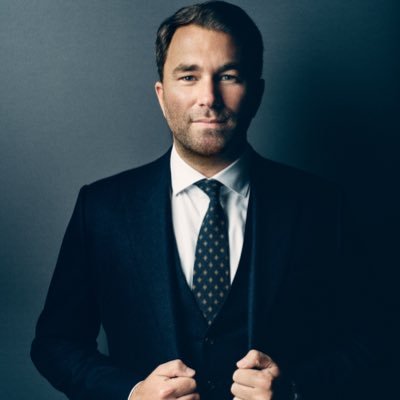 Eddie Hearn says he wasn’t announcing the Anthony Joshua vs. Tyson Fury fight on Monday when he revealed to ESPN that both fighters had signed their contracts for the meg-fight.

Hearn got a little ahead of himself by blabbing the info about the fight despite the location and the date still not been agreed on. There are 28 days for the fighters to agree on this.

If no agreement, there’s no fight, and the fans are going to be irate, dumping on the promoters and fighters alike.

Hearn admits that the announcement is supposed to be a joint with Top Rank, but what he was doing when he released the information to the media was just saying the fight had been signed.

According to Hearn, if he were actually making an announcement of the Joshua vs. Fury fight, he would have put out a press release, Tweeted the info, and walked around town carrying a placard advertising the news.

Nevertheless, Hearn’s decision to leak the news of the signing for the Joshua-Fury fight has given the casual boxing fan the false impression the fight is a done deal. Unfortunately, if the fight doesn’t happen

Hearn Explains Why He Let The Cat Out Of The Bag
“It was agreed that we’d do an announcement. It wasn’t an announcement,” said Eddie Hearn to iFL TV about him letting ESPN know in an interview that Joshua and Fury had signed their contracts for the fight.

“I confirmed with Fury’s team that they were happy that would be mentioned, and they were. So that’s what we did.

‘It wasn’t a case of me Tweeting or a press release, ‘It’s on.’ No, it was just, ‘I’ve heard you both signed.’ ‘Yes, we have signed. We’re now moving forward to confirming the date and the venue.'”
It’s interesting how Hearn says he wasn’t making an announcement when he said the fight was signed by both fighters because it sure did seem like one. I bet Top Rank promoter Bob Arum wasn’t too happy after hearing about Hearn’s loose lips.

Eddie Says, “We Should Celebrate”
“I think we should celebrate. From our side, myself, Anthony, 258 management,” said Hearn. “We’ve worked really hard to get this done.
“We still have work to do, but how good is it that everyone has put pen to paper. No one can be accused of not trying to get this done.

“From our side from their side. From both our sides, we’ve worked really hard to try and deliver this. Now we’ve got to go out and finish the job.

“Because you’ve got the biggest fight in world boxing where two guys have agreed and signed for it,” said Hearn when asked why people should get excited about the Joshua-Fury fight when there still isn’t an agreed-upon location or date.
“But if we had an agreed-upon date and venue, I would have come out yesterday. I wouldn’t have stopped on social media. You wouldn’t have been able to stop me. I would have been going around town with a placard, but we’ve not.

“We’re just keeping you updated. That’s something we’ve always done. I think it’s something that should be celebrated. It’s almost like some people want it to fail.

“There was a journalist last night that didn’t get the exclusive and said, ‘Well, there’s a long way to go. This fight might not even happen.’ It’s kind of a good sign that everyone is trying to get this done,” said Hearn.

Fans can’t celebrate the Joshua vs. Fury fight because it still hangs in the balance, totally depended on a site and location being selected in the next month.

If it’s true that they’re looking for a massive $100 million site fee for the fight, it’ll be interesting to see if Fury and AJ walk away if only a fraction of that amount is offered by a foreign country.

The Time Limit For Joshua-Fury Explained
“The only thing that’s pending is for the fighters to report back to the fighters with the various site offers and then collectively decide where we want to stage this fight,” said Hearn.