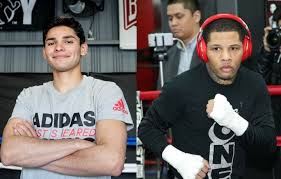 Ryan Garcia views Gervonta ‘Tank’ Davis is a “bully” that reminds him of the bullies that he grew up with early in his childhood.

Garcia was pushed around made up as a kid by the bullies, and he wants to put the bully Tank Davis (24-0, 23 KOs) in his place by beating him this year.

Last weekend, the unbeaten ‘King’ Garcia (21-0, 18 KOs) removed a minor obstacle standing in his way of a fight against WBA World lightweight champion Tank by stopping Luke Campbell (20-4, 16 KOs) in the seventh round.

While most boxing fans didn’t think too highly of Ryan’s choice of opponent in selecting the 33-year-old Luke for this fight, he still felt very proud of his victory, which came by a left hook body shot in the seventh round at the American Airlines Center in Dallas, Texas.
“I grew up in an area where there were a lot of Tanks,” said Ryan Garcia to ESPN on why he wants to fight Tank Davis. “I got bullied a lot by the kids next door.
“The kids at school, they would make fun of me, and throw me on the ground. I was scared of confrontation.
When I see Tank, I see that bully. That’s why Garcia vs. Davis is going to be one of the biggest fights you’ve ever seen.

“I have to make the bully want to bully me or shame him. I got to do something to get him in the ring,” said Ryan Garcia about Tank Davis.

There seems to be genuine bad blood on Ryan’s side with his thoughts about wanting to fight Tank and knock him out in the second round. Interestingly, Tanks sounds he’s indifferent towards the fight.

If anything, Tank appears amused, as if he’s studying an alien life form that came down to earth. It’s got to be very bizarre for Tank to watch an emotionally charged Ryan Garcia wanting to fight him so badly.

Tank isn’t as motivated for this fight as Ryan is, and you can understand why.

Ryan, 22, should take care of WBC lightweight champion Devin Haney first, though, as his fight against Campbell was an official WBC title eliminator.

Ryan Garcia Should Be Fighting Devin Haney
It looks bizarre that Ryan agreed to fight Campbell, 33, for the interim WBC 135-lb title and the fight to challenge Haney (25-0, 15 KOs), and yet he’s not taking the fight.

It gives the impression that Ryan is ducking the fight with him.
Ryan doesn’t have any animosity with Haney, a casual friend of his from way back. The two fought six times in the amateurs, and there’s mutual respect.