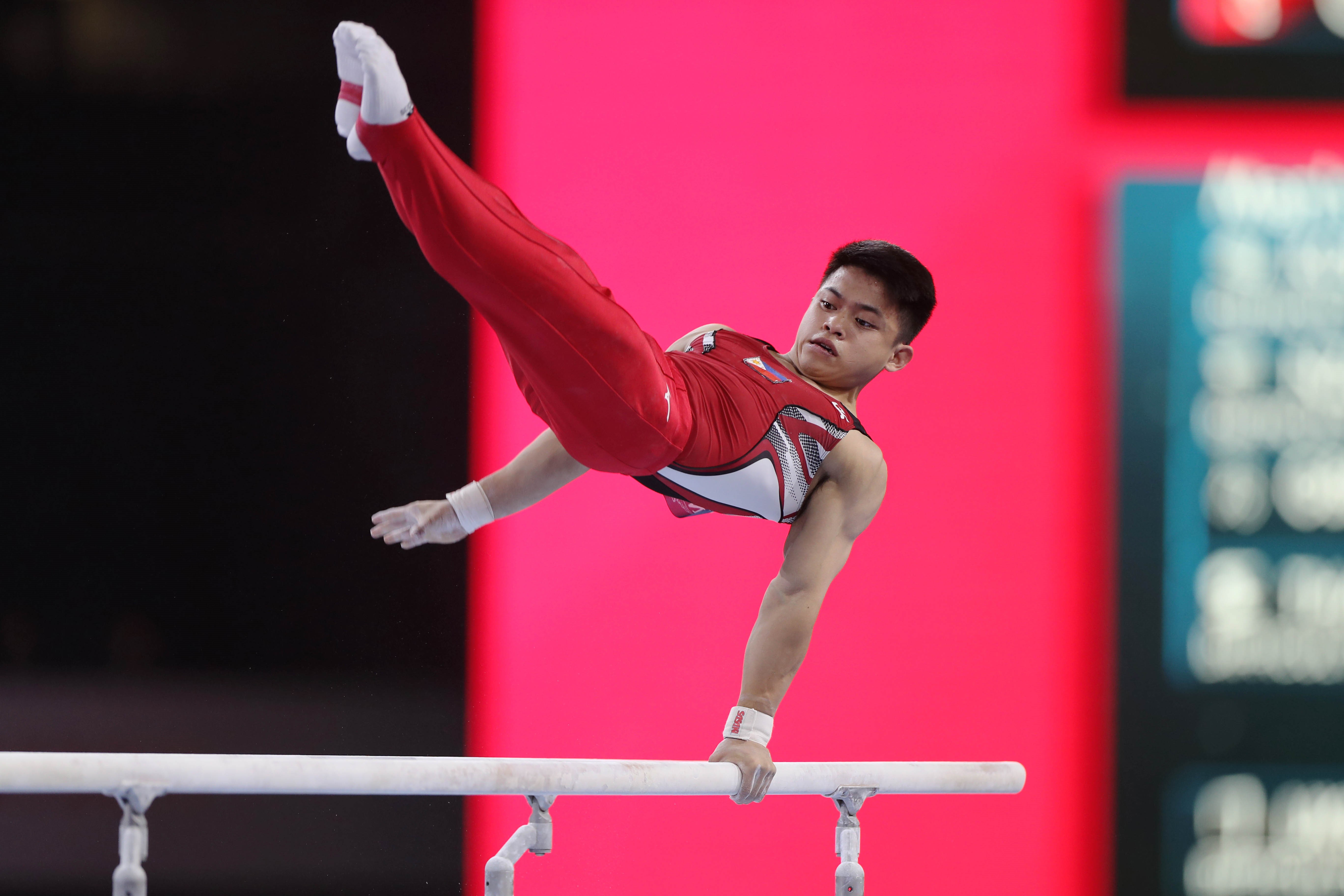 STUTTGART –  Carlos Edriel Yulo came through with a gritty performance on Monday to advance to the men’s’ all-around finals, and, more importantly, secure a slot in the 2020 Tokyo Olympic Games in the 49th FIG Artistic Gymnastics World Championships at the Hans Martin Schleyer Halle here.

Propped up by identical scores of 14.333 in the vault and parallel bars, his last two events, Yulo finished 18th overall out of 160 entries to make the cut of 24 gymnasts in the all-around finals on Friday at the ultra-modern, 15,000-seat arena in the home of both Porsche and Merdes Benz.

In a historic first for Philippine gymnastics, the diminutive 4-foot-11 dynamo emerged as the country’s second Olympic qualifier after pole vaulter Ernest John Obiena, who sealed his own ticket to Tokyo early last month in ruling a meet in Italy.

As icing on the cake, the gymnast scored a solid 14.666 points in his pet event, the floor exercise, and finished seventh overall to make cut of eight entries and enter the finals of the apparatus on Saturday in the stint supported by the Philippine Sports Commission.

Yulo’s qualifying for the Tokyo Olympics was confirmed in an official press notice issued by the International Gymnastics Federation, known by its French acronym FIG, which was received by Gymnastics Association of the Philippines secretary general Bettina Pou back in Manila.

“Yes, Caloy (Yulo’s nickname) has already qualified in the all-around because he has moved up as No. 1 in the individual rankings since  China, Russia and Japan have already qualified their athletes after their  1-2-3 finish, respectively, at last year’s worlds held in Doha, Qatar,,” noted Pou.

“This is wonderful for Philippine gymnastics and for Caloy. It is an honor for GAP to have the second qualifier to the Olympics,” noted GAP president Cynthia Carrion, who took in the athlete way back in 2009 as a GAP protégé.

“Hopefully he will continue to do well and win a medal in both the all-around and floor exercise. And we urge our countrymen back home to pray for his success here.”

Back home, Philippine Olympic Committee president  Bambol Tolentino was elated by the good news, saying: “We would like to congratulate Caloy Yulo for being our country’s second Olympic qualifier. We would like to acknowledge GAP and its president, Cynthia Carrion, in making this happen.

“As he continues to train hard, we pray that this boy will be among our medal hopeful in the Tokyo Olympics.”

Shortly after his performance, Yulo, the youngest entry  in the men’s all-around event at 19,  admitted that he felt pressured in this competition after bagging a bronze medal in the floor exercise last year.

“Medyo kinabahan po ako and my legs were shaking,” bared the athlete, who began his campaign with a score of 13.033 points on the high bar.

Incorporating new and more difficult elements in his floor exercise routine, Yulo bounced back in style to wow the crowd of 6,000 inside the arena and tally 14.666, his best score among all the six apparatuses.

But he dipped in form in his next two events – the pommel horse and rings – with tallies of 12.466 and 13.553, respectively, and looked like he would miss the boat to the all-around finals at that point.

Sensing that he was in a jam, Yulo rose to the occasion and regained his bearings to turn in high scores on the vault and parallel bars, an event where he won a gold medal in the 2017 Asian junior championships in Bangkok, Thailand, sealing his entry to the finals as well as trip to the Tokyo Olympics.

“Satisfied with Caloy’s performance but there is still a lot of work to be done,” stressed Japanese coach Munehiro Kugimiya, who has mentored the gymnast for over six years and has seen him blossom into a world-class athlete, and now, an Olympic-bound athlete.

Yulo will have a three-day break to refine his performance before returning to action in the all-around finals on Friday.