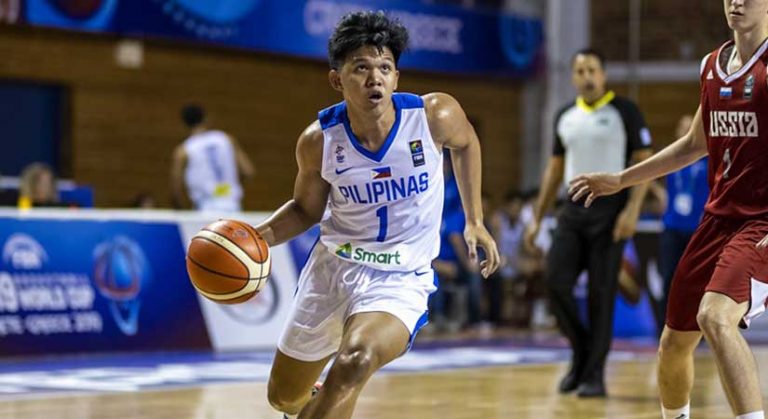 THE rough campaign of Gilas Pilipinas Youth at the FIBA Under-19 Basketball World Cup continued on Wednesday morning (Manila time) after it absorbed a 92-64 shellacking from Russia to finish the classification phase winless.

Struggled all game long to get it going, the Philippine national youth team bowed to the Russians to leave it sans a win and as the lowest seed heading into the Round of 16.

Against Russia, the Philippines trailed 28-15 by the end of the opening quarter and saw the game slip away from its hands the rest of the way.

Aleksandr Ershov led Russia in the win, finishing with 21 points and Nikita Mikhailovski with 16 points and 10 rebounds.

Anton Kvitkovskikh and Sergey Dolinin were the other players in double digits for Russia, winding up with 12 and 10 points, respectively.

For the Philippines it was Kai Sotto who led with 14 points, seven rebounds and six blocks.

Dave Ildefonso had 14 points, six rebounds and six assists. Carl Tamayo added 12 points of his own.

The nationals earned a date with Group D top seed Serbia (3-0), which breezed past the competition in its own grouping.

In three games to date, Ildefonso is leading Gilas Youth in its campaign with an average of 16 points to go along with 6.7 rebounds and 3.3 assists.

Seven-footer Sotto, meanwhile, has been good for 14.7 points, 8.3 rebounds and a tournament-best five blocks per game.

The Sandy Arespacochaga-coached team has been playing undermanned since its debut in this year’s edition of the tournament after big man AJ Edu went down with a campaign-ending knee injury in their first game against Greece.

Edu, who plays for the University Toledo in the United States, injured his right knee just two minutes into their opener against the host on Sunday.

He is now on his way to the US to undergo surgery, reports said.

The winners of the Round of 16 games advance to the quarterfinals, while the losers move on to the Classification Games for Places 9-16.