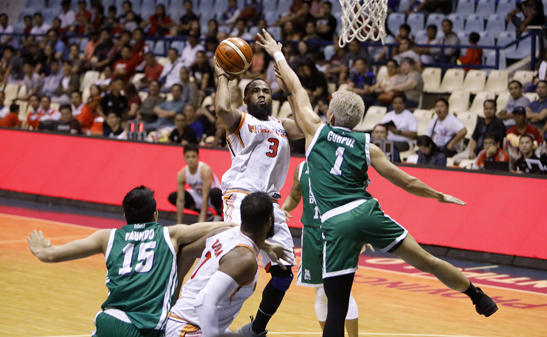 A splendid second-half surge propelled Columbian to a rousing 110-100 rout of erstwhile unbeaten NorthPort for its second win in the 2019 Philippine Basketball Association Philippine Cup at the Ynares Center in Antipolo City last night.

The victory enabled the Dyip to tie the Batang Pier in the standings as they now have identical 2-1 slates for shared second place.

Columbian flipped the switch in the third to erase NorthPort’s four-point halftime lead and take the driver’s seat without looking back.

A 10-2 blitz to end the third gave Columbian an 86-79 headway going to the payoff period.

Overall, the Dyip outscored the Batang Pier, 35-24, in the game-turning third frame.

With momentum on its side, Columbian continued its onslaught in the fourth, establishing several double-digit leads to put NorthPort away.

Stanley Pringle had a game-high 29 points for NorthPort in a losing effort.

After a hot start in his first two games, No. 3 pick Robert Bolick significantly slowed down, only scoring three points in 35 minutes of play for the Batang Pier.

Compton has been the Aces’ tactician for the last five years and now, Cariaso will get another crack at a head coaching stint to take the place of the former.

After coaching Barangay Ginebra briefly in 2015, Cariaso will now call the shots for the team where he spent most of his PBA career.