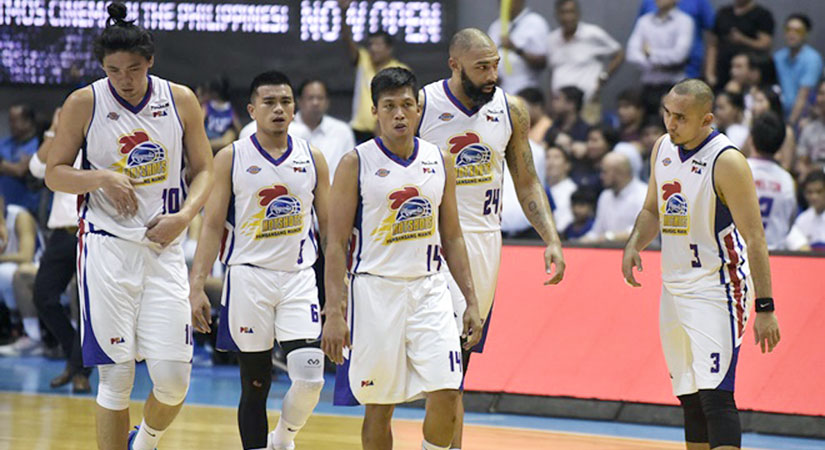 WITH their best-of-seven Philippine Basketball Association Governors’ Cup finals taking a gruelling route, the Magnolia Hotshots Pambansang Manok said they welcome the one-day break afforded them but nonetheless vowed to continue working with the end view of putting the finishing touches to the series.

Now up 3-2 over the Alaska Aces in the finals series of the season-ending PBA tournament after claiming Game Five, 79-78, in cardiac fashion on Friday, the Hotshots have to wait some time for a shot at completing a championship conquest with the finals schedule adjusted for the annual league draft.

Instead of having Game Six happen yesterday, it had been moved to Wednesday, Dec. 19, leaving the combatants a five-day break in between games.

For Magnolia coach Chito Victolero, while they would rather continue playing and build on the momentum from their gutsy Game Five victory, they still welcome the break as it gives them a chance to recharge and think things over.

“Both teams need this rest. I think both us are equally drained both physically and mentally from this tightly fought series. It would help us in a way to rest our mind and body,” said Mr. Victolero following their win on Friday.

In Game Five, both Magnolia and Alaska battled all the way to the end with the Hotshots eventually getting the better of the latter, thanks to the game-winner of guard Paul Lee with 1.3 seconds remaining.

Off a time out with less than 20 seconds to play, and Alaska on top, 78-77, the Hotshots fashioned out a play that saw import Romeo Travis make his way to the paint.

It was initially foiled by the Aces but Mr. Lee came to the rescue of the Hotshots by collaring the ball off a scramble and then pulling up for a midrange jumper that went in and gave his team the 79-78 lead.

Alaska had a chance to win the game but the jumper of import Mike Harris as time expired failed to connect, handing the win to Magnolia, which moved to a win away from the championship.

“We are happy with the victory. But the work is not over for us. We should not be content with this win. We must avoid complacency heading into Game Six and stay hungry and prepared,” said Mr. Victolero, who also shared that he might not join the team in Sunday’s draft to focus on the things they have to do come the next game.

On the part of game hero Lee, closeout games are difficult which is why they must be ready.

“It is going to be hard next game because it’s a closeout game. In basketball it’s common knowledge that it is the toughest of games. We need to prepare for the next game but also we should be mindful not to put too much pressure on ourselves and just play our game,” said the best player of the conference, who finished Game Five with 11 points and 10 rebounds to go along with his game-winner.

He was seconded by Ian Sangalang, named best player in Game Five, who said “Next game we have to keep our focus because this series with Alaska has not been easy. They will make the adjustments next game and we must ready for it.”

Game Six is set at the Ynares Center in Antipolo City.