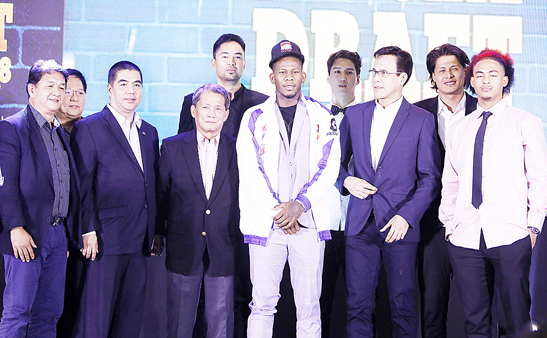 The projection was right all along.

With his athleticism, scoring ability and star potential, the Dyip made official what it stated all along that Perez is the team’s guy.

Columbian hopes that the star out of Lyceum of the Philippines University can turn its fortunes around in the coming season.

In the succeeding suspense-less picks Blackwater selected Bobby Ray Parks at No. 2 while NorthPort took Robert Bolick from San Beda at No. 3.

The top three picks went according to consensus as Perez, Parks and Bolick, clearly the top three players in the draft class, were selected first.

Parks was unable to attend the draft due to his commitments with Alab Pilipinas, his current ball club, whose game in Indonesia coincided with the PBA Draft.

“It was a special day for me. I am sad I wasn’t able to make it in the draft but I’m ready for my next adventure in the PBA,” said Parks.

With Parks, the Elite is looking forward to a better campaign ahead as it will most likely have its most competitive team i franchise history.

Bolick’s role at the Batang Pier is clear --- bemthe backcourt partner in crime of Stanley Pringle.

Paul Desiderio of UP was taken next by NLEX at No. 4, Filipino-American Trevis Jackson was selected by Meralco at No. 5, Rain or Shine went big with its No. 6 pick by selecting San Beda’s Javee Mocon.

For its second pick in the first round, NLEX upgraded its ceiling by taking Abu Tratter from La Salle at No. 7, the Elasto Painters picked again at No. 8 and took Jjay Alejandro out of NU, while Alaska snagged Jesper Ayaay at at No. 9.

Magnolia helped its frontcourt by tabbing Michael Calisaan from San Sebastian at No. 10, while Columbian took JP Calvo at No. 11.

Rounding out the first round was Jorey Napoles out of Bicol, who was selected by Phoenix as well.

As of this report, the succeeding rounds are still taking place as teams are looking to find some sleepers in the remaining pool of hopefuls.

Meanwhile, the Finals of the PBA Governors’ Cup resume on Wednesday with Magnolia eyeing to hoist the championship trophy by potentially ending Alaska’s hopes.

Ahead 3-2 in the best-of-seven finale, the Hotshots can claim glory and close out even as the Aces will try to force a deciding Game 7.