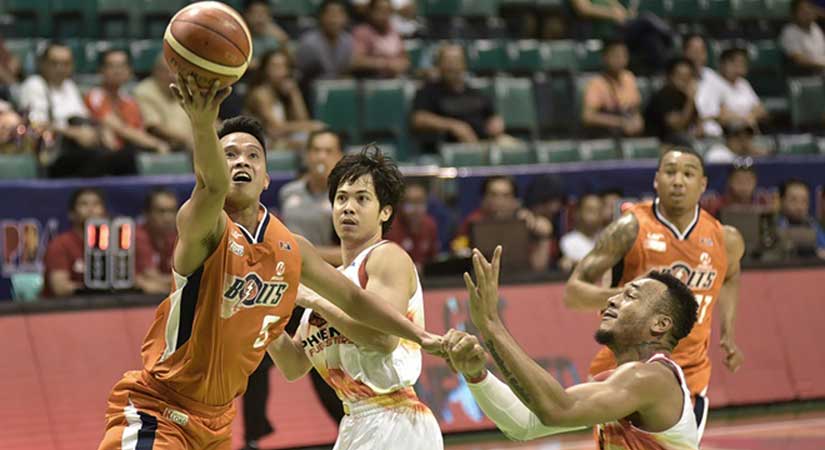 THE resurgence of the Meralco Bolts in the Philippine Basketball Association Governors’ Cup continued on Wednesday with a 90-74 victory over the Phoenix Fuel Masters in their quarterfinal face-off.

Holding a twice-to-win disadvantage against the second-seeded Fuel Masters, the Bolts, the number seven team, bucked the handicap with a total team effort on both ends of the court, especially in the second half, to force a rubber match on Friday.

It was also the fifth straight win for Meralco, which moved its way from the brink of outright elimination in the classification phase to enter the playoffs via the backdoor.

Baser Amer had 14 points and six assists while Nino Canaleta and Mike Tolomia came off the bench to contribute nine points each.

For Phoenix it was import Eugene Phelps who led the way with 27 points and 17 rebounds.

Calvin Abueva also had a double-double of 18 points and 12 boards.

In winning the game, Meralco used a solid third-quarter effort where it outscored Phoenix, 33-20, to turn a two-point deficit, 35-33, at the half to a 66-55 advantage entering the fourth period.

The Fuel Masters tried to rally back in the final quarter but had little success as they failed to hit their mark.

“We just have to go back because we know they will make the adjustments. We have to play with the same aggressiveness and stick to the game plan and get another one on Friday,” said Mr. Newsome, named player of the game, of the mindset they should have in the rubber match.

The Kings and Hotshots set up their much-anticipated semifinal collision after dispatching their respective opponents on Tuesday, seeing no need to make use of their twice-to-beat advantage in the quarterfinals.

The Kings dominated the Road Warriors en route to the victory with contributions coming from all directions.

Sol Mercado had 14 points while import Justin Brownlee had a triple-double of 13 points, 10 rebounds and 10 assists.

Magnolia, for its part, had a harder time as it got much resistance from Blackwater.

The Hotshots held tight in the end as the Elite made a serious push to snatch the win and extend the affair to a rubber match.

Paul Lee had a double-double of 22 points and 12 boards while import Romeo Travis had a triple-double of 18 points, 20 rebounds and 12 assists.

Meeting their PBA rivals anew in a high-stakes contest, the Kings are bracing for a dogfight.

“It’s always an incredible series [when we face Magnolia]. We are playing well of late but it’s going to be a tough one. Hopefully we can sustain our form,” said Kings coach Tim Cone after securing a semifinal spot.

In their lone encounter in the elimination round, Barangay Ginebra got the better of Magnolia, 93-86.