Slaughter looks to get more rhythm heading into playoffs

Slaughter looks to get more rhythm heading into playoffs

Slaughter looks to get more rhythm heading into playoffs
PBA 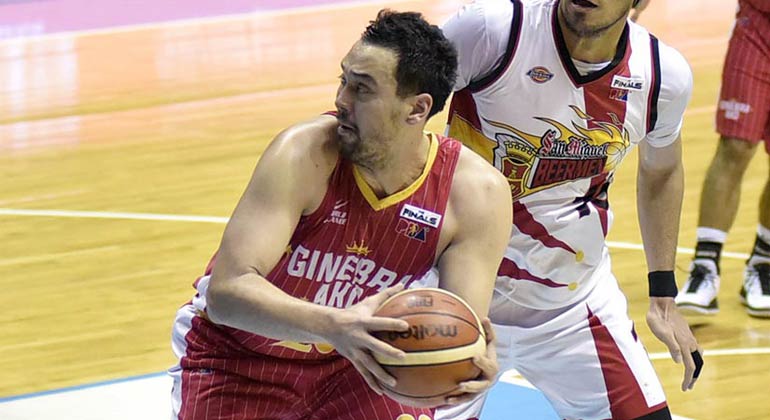 BACK in action after being sidelined for a while because of injury, Barangay Ginebra San Miguel Kings big man Greg Slaughter looks to get more rhythm in his game as the playoffs approach and help his team in its quest to win a third straight Philippine Basketball Association Governors’ Cup title.

Played his first game back from ankle injury on Oct. 28 in their “Manila Clasico” match with the Magnolia Hotshots Pambansang Manok, Mr. Slaughter finished with a near double-double of 11 points and nine rebounds as they beat their rivals, 93-86.

The victory improved the defending champions Kings to 8-2 in the standings, in a position to finish on top with a twice-to-beat advantage in the quarterfinals.

Having splashed back into action after some time, Mr. Slaughter is angling to make up for lost time and help his team.

“Happy we got the win. I think that guarantees us a top four and at the start of the tournament that was our goal. We have one more week before we play our last game in the eliminations and it’s enough time for me to find my rhythm with the team,” said Mr. Slaughter after their victory over Magnolia.

“I feel good but I also feel I can be better. So I’m taking it one game at a time. We are keeping our goal in mind and take this championship,” he added.

While his focus is on helping the Kings go for a three-peat of the season-ending PBA title, Mr. Slaughter also bared that at the back of his mind he is hoping to be able to play for Team Philippines in the next window of FIBA World Cup Asian Qualifiers that would happen in late November.

Because of the injury he had, Mr. Slaughter missed the opportunity to play in the fourth window in September, something he was disappointed about.

“At that back of my mind, yes [I’m hoping to play with Gilas Pilipinas in the fifth window]. I was bummed out not being able to play last time around. But I learned a lot being with the guys and Coach Yeng. Hopefully I’ll be able to play in the next window,” he said.

Mr. Slaughter and the Kings play their last game of the elimination round on Sunday, Nov. 4, against the TNT KaTropa.

The PBA is currently on a brief break to give way to the All Soul’s holiday. Action resumes on Saturday, Nov. 3, at the Smart Araneta Coliseum where the NLEX Road Warriors will play the Rain or Shine Elasto Painters at 4:30 p.m. and the San Miguel Beermen taking on the Meralco Bolts at 6:45 p.m.