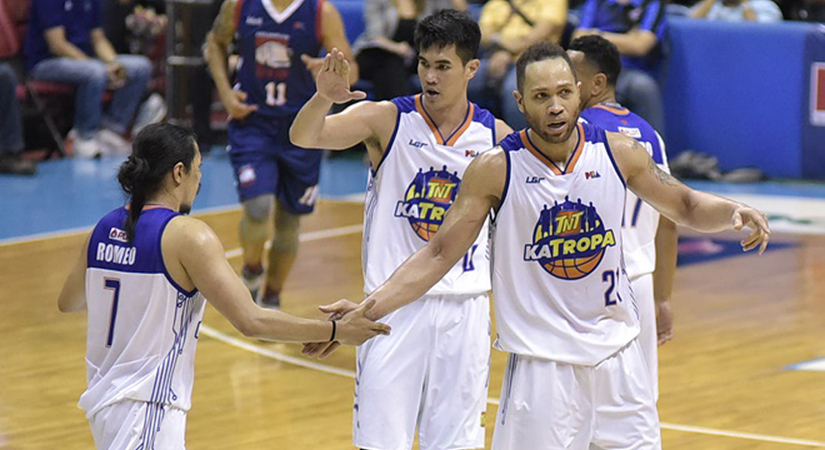 WITH their playoff lives in the Philippine Basketball Association Governors’ Cup still not safe, both the TNT KaTropa and NLEX Road Warriors are looking to book key wins today in league action at the Ynares Center in Antipolo City.

Both sporting identical 4-5 records as the elimination round approaches the end line, the Ka-Tropa and Road Warriors are in joint seventh place and still at risk of missing out on the playoff bus if they do not come up with victories in their remaining games.

TNT faces off with league-leading Magnolia Hotshots Pambansang Manok (7-2) at 7 p.m. while NLEX takes on another top team Alaska Aces (7-2) in the 4:30 p.m. opener.

The KaTropa are coming off of a loss in their last game against the San Miguel Beermen, 107-96, on Oct. 20.

In said game, TNT had the Beermen under control for much of the contest until the latter made a late charge to pull the rug from under the KaTropa to book the win.

The loss effectively halted TNT’s three-game winning streak that had it willing itself back in the mix.

Import Marqus Blakely had a near triple-double of 26 points, 18 rebounds and eight assists in the match against San Miguel with Roger Pogoy and Terrence Romeo adding 21 and 18 points, respectively.

Their efforts though were negated as the team could not finish things against the Beermen.

TNT now hopes to get back on the winning track and pad its playoff push against the Hotshots, who are also out to bounce back after losing in their previous game, 94-88, against the Meralco Bolts a week ago.

Magnolia with a win today would boost its chances of advancing to the next round with a twice-to-beat advantage.

NLEX
NLEX, meanwhile, looks to claw its way out of a deeper hole, having lost its last three games that has significantly slowed it down in the tournament.

The latest of the defeats of the Road Warriors was at the hands of Meralco, 108-105, on Oct. 14, in a game that saw them dropping the ball and allowing the Bolts to come back in the dying seconds and win.

Import Aaron Fuller finished with 31 points and 13 rebounds for NLEX with Larry Fonacier and JR Quiñahan adding 21 and 17 points, respectively.

Looking to add to the misery of NLEX while considerably helping its cause is Alaska.

Like Magnolia, a win today almost assures the Aces a top-four finish in the elimination round and earns for them the twice-to-beat edge in the quarterfinals.