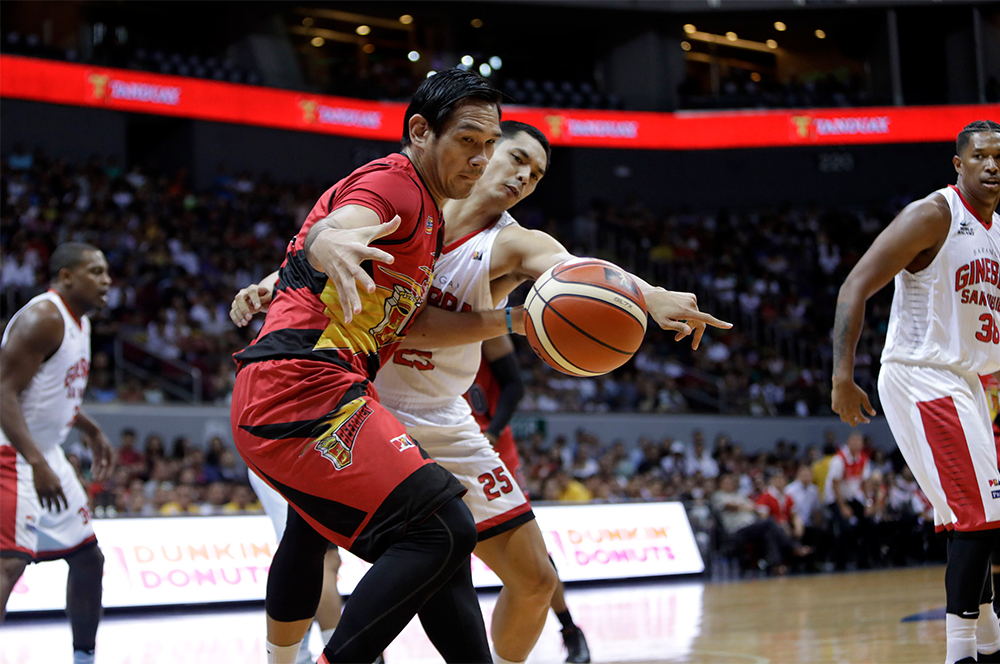 The rampaging Gin Kings have made odds makers take a second look after tagging the Beermen as the team to beat this third conference.

Ginebra leaned on a fourth-quarter blitz to humble the Blackwater Elite, 98-81, last Friday.

Bringing up the rear are the Alaska Aces (2 wins, 6 losses), the Phoenix Petroleum Fuel Masters (2-7) and the last place Kia Picanto (0-8).

It wasn’t a walk in the park for the Gin Kings though. Down by four points, 69-73, at the start of the fourth Ginebra exploded a 16-2 run to grab control of the game and eventually roll to their seventh consecutive victory.

Ginebra turned a close game into a blowout as the Kings pummeled the Elite, 29-10, in the fourth quarter starring their local crew led by LA Tenorio.

Ginebra coach Tim Cone confessed that the game could have gone either way until they took control in the fourth period.

The big winning margin didn’t reflect the close nature of the game according to Cone. He said the big turnaround came after Japeth Aguilar blocked an attempt by Walker which changed the complexion of the game.

Roi Sumang scored the first two points of the fourth on free throws to push the Elite ahead by four markers. But Ginebra outscored Blackwater, 29-8, the rest of the way to win pulling away.

This is the conference that Ginebra prepared to win starting in the second conference when they took in 6’4” import Justin Brownlee in a conference where 6’9” is the import height limit. Ginebra could afford to do this of course because they already had 6’9” Japeth Aguilar and 6’7” Joe Devance.

Brownlee filled up the stats sheet with another brilliant all around game where he finished with 17 points, 13 rebounds, six assists, four blocks and one steal as he stayed on the floor almost the entirety of the game.

The Beermen have stumbled all conference long because of an ailing June Mar Fajardo. The three-time PBA MVP has been dragging his feet and is a shadow of his former self because of a minor leg injury.

Veterans Chris Ross, Alex Cabagnot and Arwind Santos have stepped up for the Beermen who have kept their heads above water despite the enormous handicap of a Fajardo not 100 percent.

Without Fajardo, defenders can now afford to stay at home and disrupt the perimeter shooting of SMB’s sharp-shooting wings led by Marcio Lassiter. And with Greg Slaughter returning 100 percent fit to Ginebra the Beermen may not have the size to match up against the league’s most popular team.

In fact the Beermen might not even make it past the second-running Bolts in their quest to at least gain a title showdown this third conference as they gun for their second PBA Grand Slam.