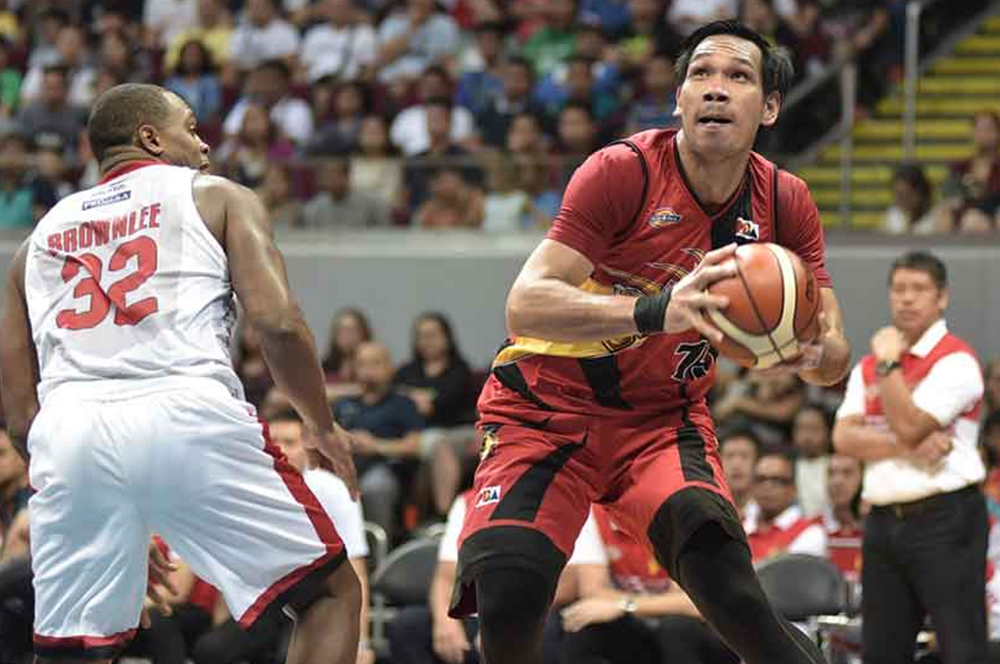 Scheduled at 7 p.m., the Beermen (3-3) look to finally rebound after losing back-to-back in their main game against the Elasto Painters (4-2), one of the ascending teams right now in the season-ending PBA tournament.

Following a strong 3-1 start to their Governors’ Cup campaign, the Beermen suddenly have found themselves reeling after two successive losses that even prompted them to change import.

Prior to that, the Beermen bowed to the highly improved NLEX Road Warriors, 103-100.

Against the Aces, San Miguel never got to recover after a slow start to the game, going down 19-9 at the end of the first quarter and trailed throughout the match.

Making matters worse for the Beermen, debuting import Terik Bridgeman, who replaced the steady Wendell McKines, produced a dud of two points, six rebounds and an assist with six turnovers in 22 limited minutes.

But while San Miguel is hitting a rough patch, a bright light for them is one-time PBA most valuable player Arwind Santos, who has been stepping up his game of late.

Forward Santos has upped his tournament averages to 17.4 points, six rebounds and 2.6 assists and was solid in their game against Alaska last time around, finishing with 29 points and nine boards.

San Miguel can also bank on the slowly return to form of erstwhile injured MVP June Mar Fajardo, who had a double-double of 12 points and 14 rebounds to compensate for the shortcomings of import Bridgeman.

But despite the struggles they have been having, San Miguel is still bullish of turning things around.

“It has been disappointing so far but we vow to make up for it and get back to winning,” said San Miguel guard Chris Ross, who has been averaging 3.8 points, 4.4 rebounds and 8.2 assists in the tournament.

While the Beermen have been laboring of late for a win, their opponent, the Elasto Painters, have been fluid and have won three games in a row to make their way to the top half of the standings.

Replacement import J’Nathan Bullock is proving himself to be a good fit for Rain or Shine with averages of 20 points, 12 rebounds and two assists in 37 minutes of play.

In their first game back from national team duty, Messrs. Norwood and Almazan helped their team to a 92-88 win over the Star Hotshots while also combining for 28 points and 25 rebounds.

“The return of Gabe and Raymond will be a big help to us especially with the energy and defense they bring,” said Rain or Shine coach Caloy Garcia.

Meanwhile, in the first game, the Bolts, currently second in the standings, are out to string up a new win streak while at the same time keep in step with the league-leading Barangay Ginebra San Miguel Kings (6-1).

Out to foil Meralco are the KaTropa, who fell in their previous game and are eyeing redemption. — Michael Angelo S. Murillo