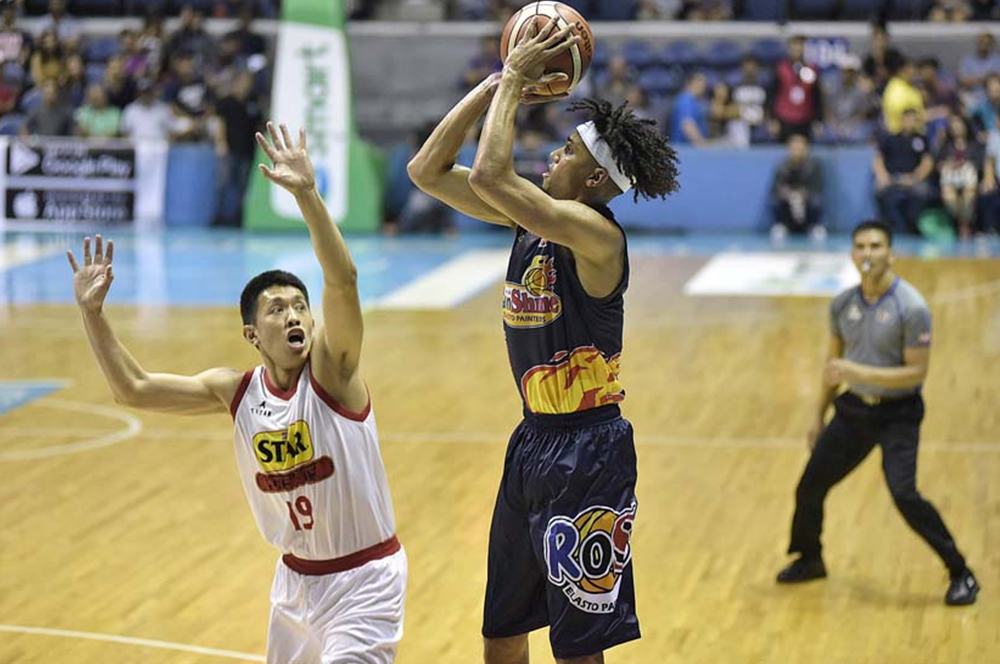 THE Rain or Shine Elasto Painters streaked to their third straight win in the Philippine Basketball Association (PBA) Governors’ Cup yesterday, defeating the Star Hotshots, 92-88, to hand the latter their first loss in the season-ending tournament.

Racked up back-to-back victories entering their curtain-raiser versus the Hotshots at the Smart Araneta Coliseum, the E-Painters made it three in a row with a solid effort to hold off the Hotshots.

The game took a slow start as both teams struggled to hit their shots.

But as the opening quarter progressed, the teams picked up their offense and finished all knotted at 15-all.

The second quarter saw the protagonists going back and forth in the first nine minutes until Rain or Shine went on a 13-2 run thereafter, towed by import J’Nathan Bullock, to create further cushion by the halftime break, 41-30.

Rain or Shine opened the third quarter on fire, outscoring Star, 11-2, to build their biggest lead of 20 points, 52-32, with seven minutes to go.

The Hotshots, however, would find their bearing after with import Malcolm Hill and Jio Jalalon getting it going.

But the E-Painters would stay ahead by the end of the third period, 68-56.

Star played with a sense of urgency to start the payoff period, chipping away at Rain or Shine’s lead.

The Hotshots came within three points, 75-72, with 5:25 left in the game with Paul Lee and Ian Sangalang clicking.

Jericho Cruz and Raymond Almazan though would combine for six points in the next two minutes to up their lead anew to nine points, 81-72, by the 3:50 mark.

Star tried to pull back but Messrs. Cruz and Almazan as well as Gabe Norwood would continue to frustrate it on both ends as the Elasto Painters raced to the win.

Messrs. Cruz and Bullock each had 18 points to lead Rain or Shine while Mr. Norwood had 15 points, 11 rebounds and four assists.

Mr. Almazan had a double-double of 13 points and 14 rebounds.

“We just needed to step up as Beau [Belga] is out today [due to league suspension]. Me and Gabe were tired going into the game since we played in the FIBA Asia Cup but we just needed to put in the effort and good thing we won,” said Gilas Pilipinas member Almazan after the game.

The win was the third straight for the Elasto Painters, which improved to 4-2, while the Hotshots dropped to 4-1.

Rain or Shine takes a near two-week break before plunging back into action on Sept. 6 versus the San Miguel Beermen while Star returns on Sunday, Sept. 3, against the Barangay Ginebra San Miguel Kings for their “Manila Clasico.”