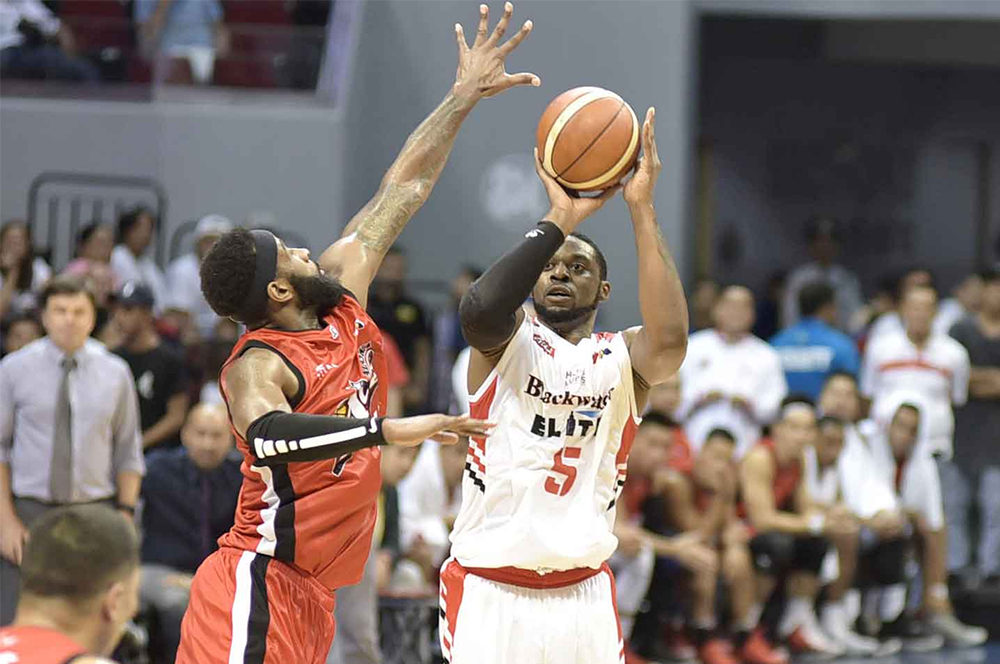 THE Blackwater Elite continued to pile up the wins in the Philippine Basketball Association (PBA) Governors’ Cup yesterday just as they kept the Alaska Aces winless and reeling following a 111-106 double overtime (OT) victory in midweek action at the Mall of Asia Arena.

One of the rolling teams currently in the season-ending PBA tournament, the Elite (3-3) stretched their win streak to three games after the win while adding to the woes of the Aces (0-5), which have lost 13 games in a row, dating back to the previous conference.

The game started competitively with both teams looking to establish control of the game early.

Blackwater, however, would go on a late charge in the opening frame to establish a 12-point cushion at the end of the first quarter, 25-13.

The Elite continued to hold sway to open the second period, working on establishing their biggest lead of the contest of 14 points, 39-25, in the first seven minutes.

Turning to their pressing defense, the Aces went on a 10-0 blast in the next two minutes to cut their deficit to 39-35.

Import Henry Walker and Michael DiGregorio combined to give the Elite some breathing space thereafter but the Aces would not allow them to distance themselves by a mile and kept their lead manageable, 44-40, by the halftime break.

Just like in the previous quarter though, the Elite would find ways to stay ahead, with Mr. Walker, JP Erram and Bam Gamalinda leading.

The quarter ended with Blackwater still up, 68-60.

At the start of the payoff period it was the Elite who were on the firing end as Mr. Walker and Niño Canaleta waxed hot.

They built an 11-point lead 79-68 with eight minutes remaining.

Showing resilience, the Aces came back strong, with guards Jayvee Casio and Simon Enciso showing the way, cutting down their deficit to just four, 81-77, at the four-minute mark of the last quarter.

Mr. Erram though would string up four straight points to keep the Elite afloat until he was called for a flagrant foul 1 on Alaska import LaDontae Henton with 2:57 remaining in rhe game.

The Aces used it as a rallying point to rack up six straight points to level the count at 85-all with 2:49 left on the clock.

Mr. Walker then answered with four points in a row to keep his team ahead, 89-85, with two minutes on the clock.

The two teams exchanged baskets thereafter to keep the game tight at 91-89 with the Elite still with the lead with 32 ticks to go.

Mr. Enciso tied the game, 91-all, with a floater down the lane with 22 seconds remaining.

Both teams had chances to finish the game but failed to consummate them to send the game to overtime.

Drought would fell on both squads for most of OT until Mr. Gamalinda scored with 1:11 on the clock, which Mr. Henton answered with a bucket seconds later to level things at 95-all.

Mr. Walker put Blackwater on top anew, 97-95, with a basket with 24 seconds remaining which Mr. Henton negated to send the game to a second OT.

The cardiac affair continued in the second OT. Alaska took a two-point lead, 103-101, with 1:50 remaining on a Henton bucket.

Mr. Gamalinda retaliated with a triple to reclaim the lead only for Mr. Casio to answer back.

Mr. DiGregorio hit a three-point shot of his own to push Blackwater ahead, 107-106, with less than 30 seconds to go.

It was a lead that the Elite would use to bring home the win.

Mr. Walker led the Elite with 35 points while Messrs. DiGregorio and Gamalinda had 17 and 15 points, respectively.

“This game showed there are no easy wins in the PBA. We thought we had it in control with six minutes left in regulation but Alaska came charging back. Good thing we showed the character needed to win the game,” said Blackwater coach Leo Isaac after the game.