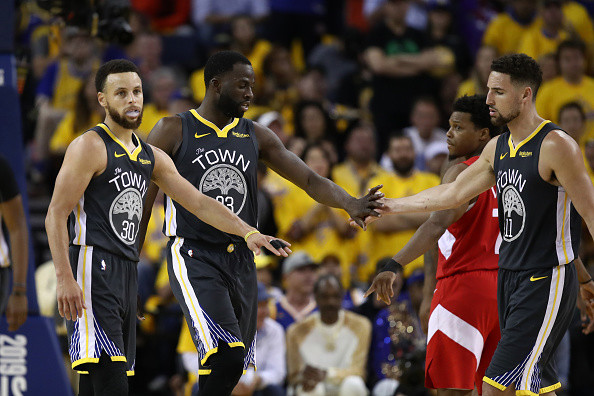 USA Men’s Basketball has officially announced their preliminary roster for the 2020 Summer Olympics in Tokyo, and the Golden State Warriors are well represented. The 44-man roster includes three Warriors, and they’re exactly who you would expect: Steph Curry, Klay Thompson, and Draymond Green.

In addition to the Warriors core, three former Warriors are also on the roster: Harrison Barnes, Kevin Durant, and JaVale McGee.Team USA obviously won’t be taking 44 players to the Olympics, but the final roster will come from this pool of players. And one of the people making those roster decisions is Warriors coach Steve Kerr, who is an assistant on Team USA under head coach Gregg Popovich.

Prior to the NBA season, Curry, Green, and Thompson all expressed a desire to play in the upcoming Olympics. There’s a chance Thompson’s ACL injury won’t be healed in time, but then again, there’s a chance it provides him an opportunity to shake the rust off before the 2020-21 season.

Thompson and Green were both members of the 2016 Olympic team that won a gold medal in Brazil. Despite coming off of back-to-back MVP campaigns, Curry had to sit out those Olympic games due to injuries sustained in the 2016 playoffs. If he does play in Tokyo, it represents his first chance to win an Olympic medal, which would be just another feather in the cap of an all-time great career.