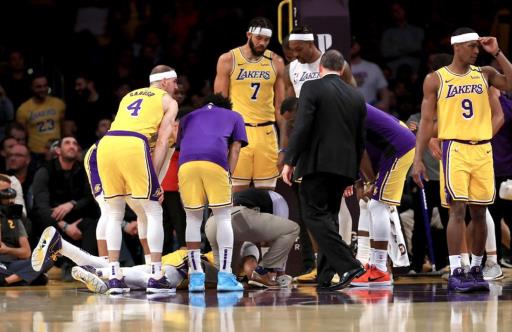 Lakers center Anthony Davis left the team’s game against the New York Knicks in the third quarter after landing hard on his back following a collision around the rim with Knicks forward Julius Randle. He missed the rest of the game with a sacral contusion/bruised tailbone, according to the team.

The Lakers will not practice on Wednesday.

Davis sustained the injury while trying to block Randle’s shot. He was called for a foul as Randle hit him in the air, knocking Davis off balance as he fell to the ground. Davis was down on the floor grabbing his lower back as concerned teammates and the training staff looked on, and had to be helped up before (gingerly) walking off under his own power.

It should be noted that the play did not appear to feature any ill intent from Randle — a former Laker and who was also teammates with Davis on the New Orleans Pelicans — who by the looks of things was just bulling his way to the basket and did not intend Davis to cause Davis to land awkwardly in what was a freak outcome.

It is unknown exactly how many games Davis will ultimately miss, if any, but our own Dr. Rajpal Brar had some info on what the standard timeline for this injury in others usually is.

Davis has already been getting listed with a sore shoulder on the injury report of late, and has also dealt with ankle and rib injuries this season. Given how huge Davis is to their championship hopes, they should approach this as cautiously as possible.