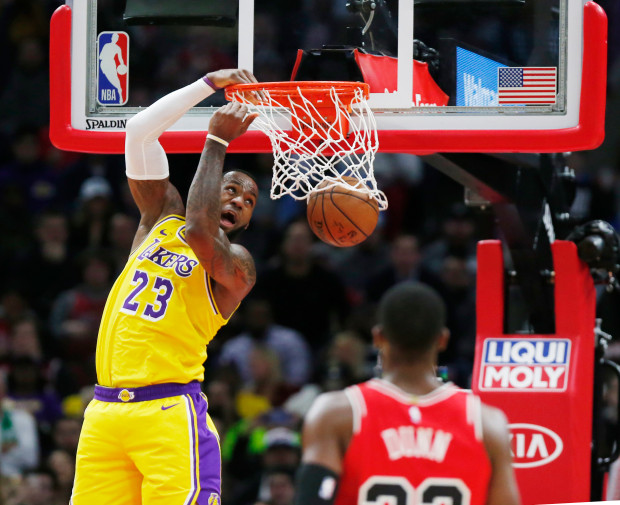 The Lakers beat the Bulls 118-112 despite an off night from Anthony Davis. LeBron James led the team with his third triple-double in a row: 30 points, 10 rebounds and 11 assists.But it was a lineup of reserves that took the game back for the Lakers.

Troy Daniels, Kyle Kuzma, Alex Caruso, Quinn Cook and Howard started the fourth quarter and took the Lakers on a 14-0 run to take the lead after trailing by as many as 19 points in the first half.Cook finished with 17 points while Kuzma added 15. Howard scored six points with six rebounds, but was a menace defensively.

The Lakers secured their sixth consecutive win by going 3-0 on this road trip.Davis looks forward each year to playing in his hometown, but didn’t put on much of a show early in the game. He missed seven of eight shots to start and could be seen hanging his head on the bench in frustration.
Davis returned late in the fourth quarter and finished with 15 points, seven rebounds and three assists.While the rest of his teammates struggled, James did what he could. He fueled an 8-0 run in the second quarter to pull the Lakers to within six points. But the Bulls answered back in a big way, taking advantage of turnovers to extend their lead.

Chicago’s 19-point lead in the second quarter marked the largest deficit the Lakers had faced against any team all season.Heading into the fourth quarter, the Lakers trailed by 13. That’s when Lakers coach Frank Vogel trusted his bench to fix what, Tuesday night at least, most of his starters could not.

The Lakers are so talented that they’ll be able to hang with just about anyone and, on nights like Tuesday where they play a vastly inferior opponent, be able to dominate when they have to and win handily, even if they didn’t really earn it with their play early in the game. But there are going to be nights where it would be nice to take care of business earlier in the game so as to get their rotation more rest.

The Lakers now have a couple days off as they come off a 3-0 road trip before resuming play at home Friday night against Jimmy Butler and the surprising Miami Heat. AP