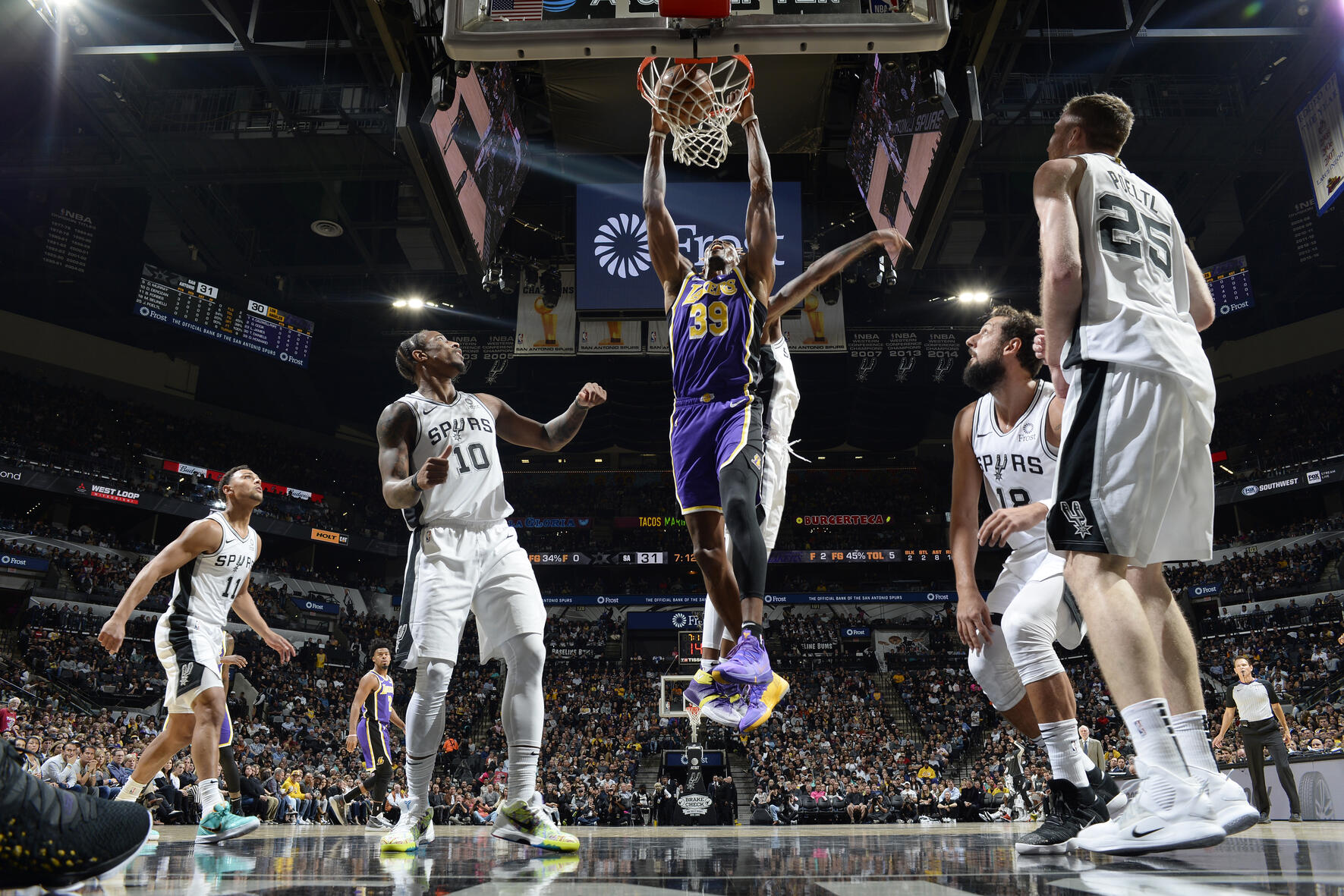 The Los Angeles Lakers have already shown they can win with historic efforts from their two stars. But more critically for a team that fancies itself a real contender, on Sunday L.A. showed it can win with contributions from the team’s role players as well, with a few of their less-heralded contributors helping the Lakers escape San Antonio with a 103-96 win over the Spurs.

The Lakers actually went into halftime with a lead, a change of pace from most of their games this season, and proceeded to use their typical third-quarter hot streak to build a 19-point lead against San Antonio. But like the villain in a horror movie, the Spurs just refused to die, with guard Dejounte Murray scoring 14 points in a row to tie things up at 90 in the fourth quarter.

But then two straight buckets from frequent Laker fan scapegoat Kentavious Caldwell-Pope gave the Lakers a 95-90 lead they wouldn’t look back from. Dwight Howard was also a huge part of the Lakers’ fourth quarter efforts, repeatedly dunking all over the spurs while crashing the glass, diving to the rim and affecting seemingly every Spurs shot at the rim down the stretch. Howard finished the game with 14 points, 11 rebounds and somehow only 2 blocks as he continues to make a case to start, while Caldwell-Pope ultimately ended the night with 14 points.

The Lakers’ two stars were also big parts of the win, with both Anthony Davis and LeBron James scoring a few key baskets down the stretch as the Lakers grasped to hold on to their lead. James (21 points, 11 rebounds and 13 assists) finished with his second triple-double in a row — and the 83rd of his career — and also moved past Kobe Bryant on the NBA’s all-time steals leaderboard, while Davis ended the evening with 25 points, 11 rebounds and 4 blocks.

Things couldn’t all go well for the Lakers, as, Avery Bradley left the game in the fourth quarter with a lower right leg injury and was declared out for the night (x-rays were negative), and will be day-to-day moving forward.

That’s a bummer and could be a blow to the Lakers’ momentum, but this is still a night for Lakers fans to celebrate. This team won a game in which it shot just 6-24 from 3-point range, showed it has role players who can make it so that James and Davis don’t have to do literally everything (just most things) and is demonstrating that their defense travels.

This is a Lakers team that can win ugly, and do so in spit of getting very little from Kyle Kuzma as he continues to recover, all while still not hitting their offensive stride. As they start to figure those things out, the Lakers could be as dangerous as anyone. And even now without either of those factors, they’re still on a five-game winning streak and 5-1 on the season. As they head on to wrap up up their first road trip of the year against the Chicago Bulls on Tuesday, it’s hard not to be really optimistic about both what this team is, and what they could be.