Carried by a 34-4 first quarter run, the Suns blow past the Warriors

Carried by a 34-4 first quarter run, the Suns blow past the Warriors

Carried by a 34-4 first quarter run, the Suns blow past the Warriors
NBA 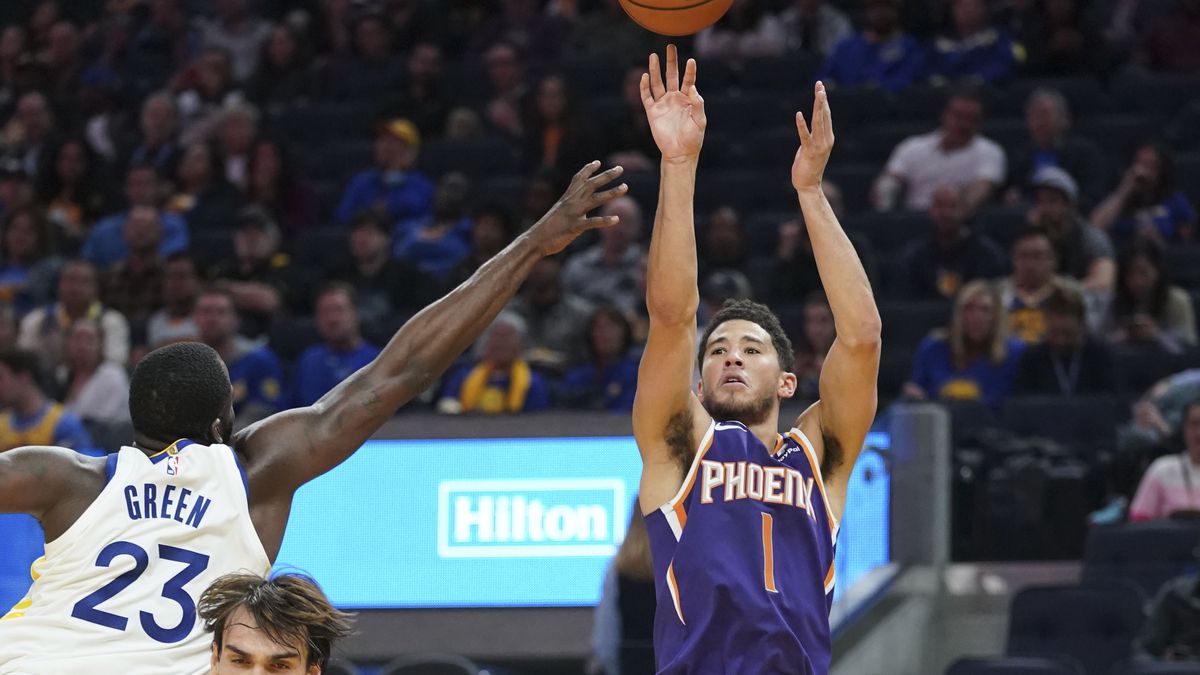 After years of humiliating defeats by the upper echelon of the NBA, the Phoenix Suns were able to extract some revenge over a long time bully in the Golden State Warriors. The Suns beat the Warriors 121-110, leading by as much as 34 at one point in the game, and there were stretches where Phoenix was just running laps around the team.

The Suns have looked like a brand new team over the beginning of this season and tonight was no different as Phoenix took it to the Warriors early and buried them quickly. Whether it was hustling, defense, passing, pace of play or just setting up screens, the Suns looked focused and played with an energy that you wouldn’t see from them. The Suns were running the Warriors out of their own court and the Warriors just couldn’t match their intensity. They were able to jump right on the throats of the Warriors and got on a major 34-4 run to cap off the first quarter.

This run effectively ended the game as the Warriors wouldn’t get close to catching up to the Suns until the middle of fourth quarter, where they scored 43 to the Suns 26. By that point, superstar Steph Curry was already out due to a broken hand he suffered in the third quarter and you could tell it deflated the team. The Suns were by that point doing an effective job limiting the two time MVP, giving up only nine points and six assists.

A shining star for the Suns was center Aron Baynes who’s playing for the suspended DeAndre Ayton. He cooked an impressive 24 point, 13 rebound and seven assist performance while anchoring the defense on the other side. His strong play on the defensive side has allowed the defense to really shine in these fist five games and it’s going to be tough seeing go back to a bench role when Ayton comes back.

The play of the defense was one to behold. The Suns have been outstanding so far and even up against two strogn scoring guards, the Suns were able to hold to 24 points off 18% shooting from three and 35% from the field. The Suns were just all over the Warriors, whether it was swatting passes and creating fast breaks, harassing the guards or not letting them get second chances, Phoenix played like an elite team.

Meanwhile, Devin Booker had himself a strong night as well, scoring 31 points to go along with his five assists and four rebounds. He got comfortable shooting the 3-ball, hitting 60% of his shots while hitting 10/21 from the field. This was the case for most of the team as they hit 41.7% from three and 45.8% from the field.

The most impressive part of this win was that Booker wasn’t lighting the world on fire for the Suns to get this massive lead. We’ve seen nights where Booker rips out a 50 point scoring performance but the Suns weren’t anywhere close. Tonight, the Suns had a terrific team performance and you can just see from how the stats went down. Every starter had double digit points and though Cameron Johnson was the only bench player do to so, the offense started to slow down once the game was seemingly out of reach. Not a bad way to end your 23rd birthday.

It seems like yesterday the Suns were getting crushed by the Clippers and Trailblazers by 50 points. And now, they’re the ones handing out crushing defeats. It’s concerning that the Suns let these Warriors get this close to making it a game but it’s tough to find that balance of keeping your foot on their necks and not trying to run it up. The team had an outstanding first quarter and until the middle of the fourth quarter, never let up on the Warriors. Even in that fourth quarter the Suns closed the deal. The team is playing hard, they’re deep and they’re a lot of fun to watch. I don’t want to overreact but I would run through a brick wall for this team.