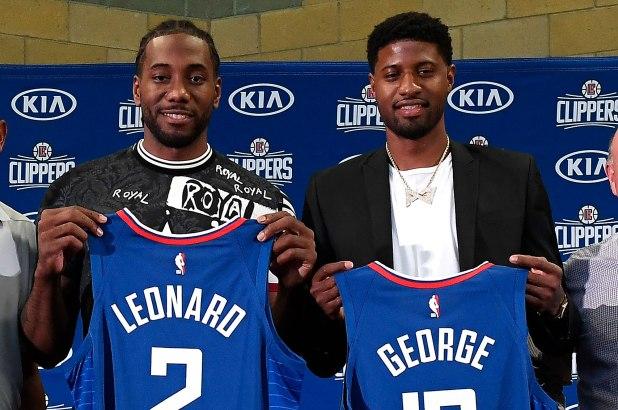 Kawhi Leonard and Paul George got introduced as Los Angeles Clippers today and team owner Steve Ballmer couldn’t hold back his excitement. Ballmer was so “fired up,” he couldn’t even use the notes he had prepared. The look on Leonard’s face was priceless resembling a guy finding out his boss is just a little too into the moment.

He let his excitement do the talking, furiously clapping his hands and shouting “pretty cool, pretty damn cool” as his two big prizes, Kawhi Leonard and Paul George, sat to his left.

The Clippers’ celebration continued in the form of a press conference Tuesday afternoon in Los Angeles with talk of the franchise’s first title filling the air.

“We’re only here for one reason,” Ballmer said. “We want to win it all. … We need to win the last game played during the NBA season. That’s the game we got to win.

“The only thing that matters is the Larry OB [the NBA title]. From now it’s all about the Larry OB.”

Leonard and George, the two Los Angeles natives, stunned the NBA world by teaming up with the Clippers. Leonard, the NBA Finals MVP, left the Raptors after winning it all as a free agent, and convinced George to demand a trade from the Thunder to join him in Los Angeles.

Coach Doc Rivers, who both players said factored heavily into their decisions to come to the Clippers, backed up that big talk himself, saying, “We’ve done some winning. We want to be the winners. That’s our goal.”

George and Leonard didn’t make any bold statements, but when asked about the shadow the Lakers have cast over the Clippers, they didn’t back down.

“As far as the last few years, as far as the basketball standpoint, the Clippers have been better,” Leonard said. “It’s just media.

They’re going to get the attention. They’re the Los Angeles Lakers. They’ve been winning championships for a long time. Even if we do win, who knows how the coverage will change over. But I don’t feel like I’m focused on that. I just want to win. If we go to the championship and win, we don’t get any coverage, that’s fine with me. I’m good.”

Added George, “We have our own identity. We’re chasing something else. We’re not looking at the battle of LA. We got bigger things in mind, bigger goals to accomplish, other than the shadow. None of that really means anything.” AP